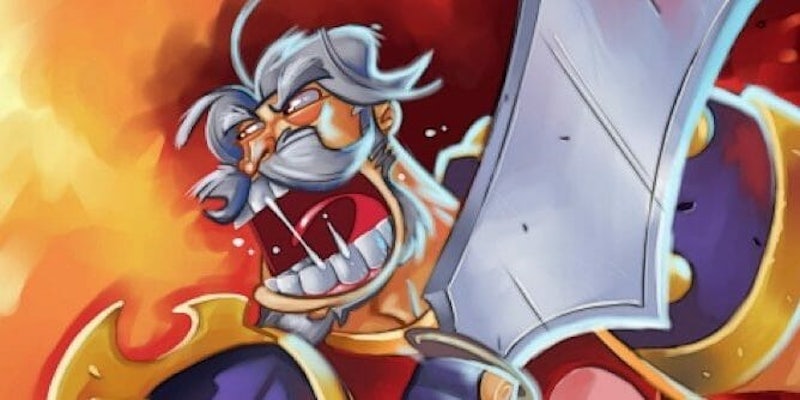 Art by Mike Krahulik for Hearthstone/Blizzard

“Wanna feel old?” is what websites always ask when they’re about to feed you a slab of internet nostalgia, but we’re serious this time: want to feel really, really old? Today is the 12th anniversary of one of the most important viral videos of all time: Leeeeeeroy Jeeeeenkins!

Leeroy was a jokey character in the online roleplaying game World of Warcraft whose player stepped away from the keyboard to eat chicken while the rest of his guild planned an important raid. When he came back, he decided to run into the monsters’ nest without having heard the plan, belting out his now-famous catchphrase “Alright, time’s up, let’s do this! Leeeeroy Jeeeeeenkins!”

Of course, his guildmates followed him and everyone got themselves killed in the rescue attempt.

“At least I had chicken,” Leeroy muttered.

The video was uploaded to a World of Warcraft video site, WarcraftMovies.com, on May 11, 2005, and it became hugely popular after it made the leap to YouTube later that year.

The creator of the video and voice of Leeroy, Ben Schulz, later admitted that he and his college guildmates in “Pals For Life” had staged the skit for promotional and comedy purposes, but he said it was based on a real in-game situation.

In the dozen years since he first appeared, Leeroy has become a pop-culture phenomenon. He’s been a Jeopardy! answer, a what-not-to-do reference in U.S. military publications, and a joke on How I Met Your Mother.

Leeroy references still pop up all the time in 2017. The latest example is a very good tweet about the week in April where United Airlines, Pepsi, and White House Press Secretary Sean Spicer all created public relations disasters:

Pepsi: That was the biggest PR blunder of the week, year maybe.

Leeroy was eventually added to World of Warcraft as a non-player character (with Schulz doing his voice), and he’s an iconic card in one of Blizzard’s other games, Hearthstone. The video made Schulz a rock star in the World of Warcraft world, and he even performed Leeroy’s famous line live at Blizzard’s annual convention, BlizzCon, in 2007:

Schulz’s Leeroy voice made a comeback in 2016 with the release of the Warcraft movie. Although the character doesn’t appear in the film, Schulz was there to walk the red carpet at the premiere.

At the time, he told the International Business Times that after trying for a while to parlay the Leeroy character into a career or business, he’s done with both Leeroy and World of Warcraft. Now he’s just happy his character is out there in the world.

“Every now and then I wonder whether I could have done something more with it,” said Schulz. “But it’s a two-sided sword. I think part of the reason it’s gone so well is I didn’t ruin it.”

Schulz is now married and working as an engineer, the IBT reported, and he’s moved on to playing other games, like Titanfall. He does occasionally get to have a cool, Leeroy-related experience, though, like surprising actress and World of Warcraft nerd Jamie Lee Curtis:

Time may have been up for the in-game Leeroy, but it’s never up for Leeroy, the meme. And if it is … well, at least he had chicken.