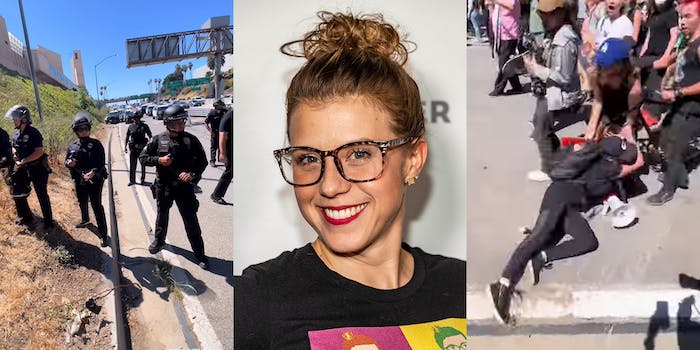 After the Supreme Court’s shocking decision to overturn Roe v. Wade, Full House actress Jodie Sweetin was one of many people who took to the streets in protest. Her experience went viral this weekend, after Los Angeles Police Department (LAPD) officers were filmed throwing her to the ground on the L.A. freeway.

Originally posted by journalist Mike Ade, the video shows Sweetin being shoved toward a crowd of other pro-choice protesters. According to Ade’s previous tweet, the protesters were marching along the freeway toward L.A. City Hall to join other activist groups, and “Officers quickly became physical with the weaponless crowd.”

In the background of the video, a protester shouts, “What the fuck is wrong with you guys?”

Two days earlier, the LAPD faced criticism for its behavior toward journalists at a different pro-choice rally, with one officer striking a reporter on the head.

Sweetin reposted the footage on Instagram, in a shared post with the activist account @theprogressivists. “Thank you for posting,” she wrote. “Love everyone out there in the streets fighting for what’s right.”

Sweetin shared her support for abortion rights on a number of occasions and was one of several celebrities to endorse the anti-fascist organization Refuse Fascism in 2020. But since she’s best known as a former sitcom child star, her activism is still surprising to many. This video attracted a lot of attention on social media, as people highlighted the contrast between Sweetin’s image and the LAPD’s reputation.

“Apparently, it takes half a dozen armed men to deal with a threat like Stephanie from FULL HOUSE,” remarked one viral tweet, while another reads, “Cops did nothing while 19 children in Uvalde were murdered and stood aside while insurrectionists tried to overthrow the government but look at them thinking they’re tough guys for pushing Stephanie Tanner around.”

In a statement to the press, Sweetin said, “I’m extremely proud of the hundreds of people who showed up yesterday to exercise their First Amendment rights and take immediate action to peacefully protest the giant injustices that have been delivered from our Supreme Court,” adding, “This will not deter us.”

The LAPD also responded, saying, “The force used will be evaluated against the LAPD’s policy and procedure.”

The Daily Dot has reached out to Sweetin and LAPD via email.