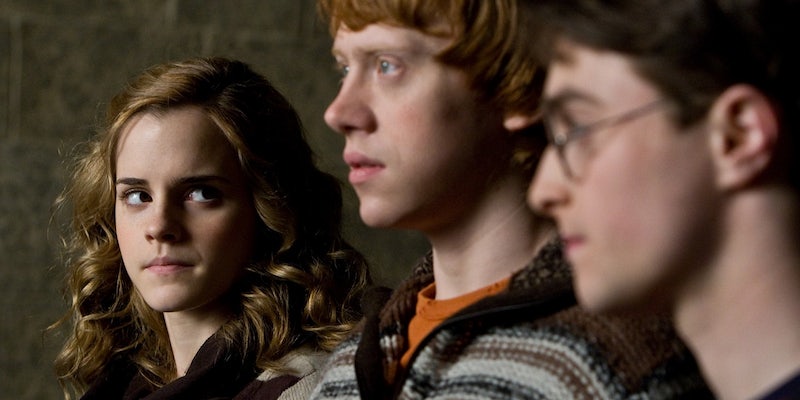 ‘She will be minting money from this’: ‘Harry Potter’ stars face online criticism for reunion amid J.K. Rowling’s anti-trans controversy

The Big 3 has previously offered support for trans rights.

The Harry Potter franchise remains a major cash cow for Warner Bros., so it’s no surprise that there’s a cast reunion in the works. On Jan. 1, HBO Max will air TV special celebrating the 20th anniversary of Harry Potter and the Sorcerer’s Stone. Unfortunately, this event is already marred by controversy due to J.K. Rowling‘s involvement—or lack thereof.

Over the past two years, Rowling has repeatedly shared transphobic talking points on Twitter, becoming a symbolic figurehead for the U.K.’s anti-trans movement. In turn, this had a serious impact on the Harry Potter fandom. Some fans chose to boycott new spinoffs or leave the fandom entirely, while others find ways to enjoy the franchise while distancing themselves from Rowling. This makes the 20th anniversary reunion a complicated event, with some fans expressing dismay that the lead actors agreed to participate at all.

All three Harry Potter leads spoke out in support of trans rights last year, with Radcliffe saying he was “deeply sorry for the pain” caused by Rowling’s comments. Watson shared a more general message of support (“Trans people are who they say they are and deserve to live their lives without being constantly questioned”), as did Grint.

For some fans, this raises ethical questions about why these actors agreed to the reunion. On the one hand, Harry Potter is incredibly meaningful to millions of people, and was a formative experience in the lives of its young cast. On the other, this HBO Max event will provide money and positive publicity for Rowling. Radcliffe, Watson, and Grint’s involvement acts as a human shield against Rowling’s increasingly toxic reputation, protecting Warner Bros.’ investment in Harry Potter.

@ErinTheMom tweeted that Rowling will “feed those profits into anti-trans organizations, and trans people will suffer from it.”

The response to the reunion is mixed, to say the least. Some people either don’t care about Rowling’s politics, or find it easy to separate the art from the artist. There’s a lot of genuine excitement over the anniversary! At the same time, some current and former fans are accusing the Harry Potter stars of hypocrisy for taking HBO Max’s money instead of taking a stand against Rowling: “[S]he will be minting money from this…” tweeted @maxtroja.

This kind of nostalgia-fueled event is typically an easy payday for the people involved, but the Potter cast will likely face more criticism as the reunion draws near. Rowling’s absence speaks for itself. She’s still heavily involved in the franchise, co-writing the next Fantastic Beasts movie, and regularly posting about Harry Potter on Twitter. There’s only one plausible explanation for her not to appear in the reunion, and that’s her controversial politics. By focusing on the actors instead of the author, Warner Bros. is trying to ignore the elephant in the room.

The Daily Dot has reached out to Daniel Radcliffe, Emma Watson and Rupert Grint for comment.