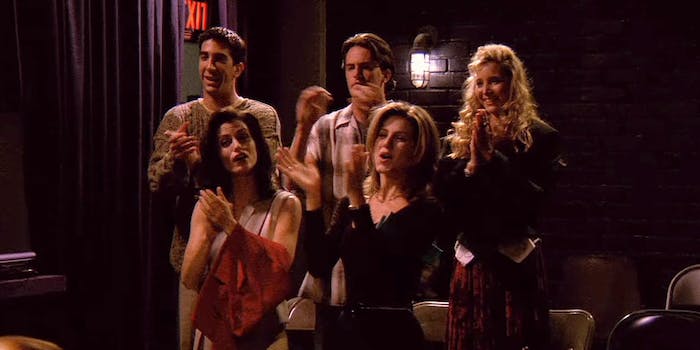 HBO Max is in early talks with the cast and creators.

Fans have been clamoring for the cast of Friends to reunite for years, and thanks to HBO Max, we might get that reunion. Well, sort of.

According to the Hollywood Reporter, Friends creators David Crane and Marta Kauffman and the show’s main cast—Jennifer Aniston, Courteney Cox, Lisa Kudrow, Matthew Perry, David Schwimmer, and Matt LeBlanc—are all in talks to appear in an unscripted Friends reunion special that would air on HBO Max, which is set to launch in May 2020.

Negotiations for the Friends cast and creators to appear in the special are still underway, and between that and scheduling logistics, it’s possible that the special will ultimately fall through. But if not, it gives Friends fans the chance to hear the cast go in-depth about the show that not only changed their lives but also one that also had a profound effect on pop culture.

Pretty much since the moment the show ended in 2004, the Friends cast has been asked about the potential of a reunion well before reboots and revivals became commonplace on TV; at one point, Jimmy Kimmel made Aniston read Friends fanfiction on his show. Photos of various cast members getting together—whether it was for another show like Cougartown or a lunch—sparked speculation with Aniston posting the latest one when she joined Instagram last month.

Even though Friends first aired more than 25 years ago, it’s still one of Netflix’s most popular shows to stream, especially among viewers who were either too young to have watched Friends during its run or weren’t alive for parts of it. It’s easily one of the biggest draws of HBO Max, and older and younger fans alike will likely tune into this special if it debuts on HBO Max.

But when actors are seemingly returning to their iconic roles for reboots every day and revivals and when you can even get the cast of Will and Grace to reprise their roles for multiple seasons, for some fans, an unscripted special might feel like a bit of a letdown.