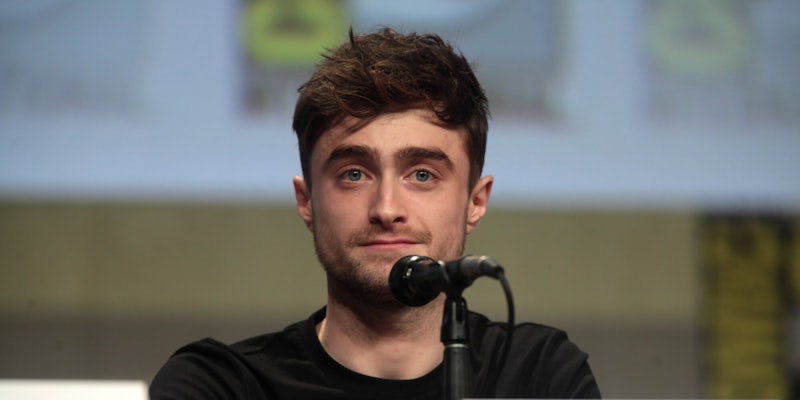 Daniel Radcliffe speaks out in support of trans rights

The star distanced himself from J.K. Rowling's transphobic comments.

“Transgender women are women,” he wrote. “Any statement to the contrary erases the identity and dignity of transgender people and goes against all advice given by professional health care associations.”

As someone whose public image is permanently linked with Harry Potter, he’s aware that people will want to know his opinion here and potentially frame this as a feud between himself and Rowling. He acknowledges the debt he owes to Rowling’s work, while also confirming that he supports trans rights, and is fully aware of the discrimination trans people face.

“To all the people who now feel that their experience of the [Harry Potter] books has been tarnished or diminished,” he continued. “I am deeply sorry for the pain these comments have caused you. I really hope that you don’t entirely lose what was valuable in these stories to you.”

In addition to Rowling’s power as an extraordinarily rich public figure with 14.5 million Twitter followers, her comments are hurtful because so many people view Harry Potter as a formative work of children’s literature. Plenty of Harry Potter fans are trans, and plenty of young readers are still being influenced by her work. Radcliffe understands this, telling fans that it’s still OK for them to celebrate positive themes of the novels, and that Rowling’s remarks shouldn’t be allowed to “taint” that experience.

“If you believe that a particular character is trans, nonbinary, or gender fluid, or that they are gay or bisexual; if you found anything in these stories that resonated with you and helped you at any time in your life—then that is between you and the book that you read, and it is sacred,” he wrote.

Radcliffe’s comments are a welcome response to those who felt betrayed by Rowling’s gradual slide into blatant transphobia. Over the past few days, two media outlets have announced boycotts of Rowling’s work (the geek news site io9 and the book review site Book Riot), more fans have publicly distanced themselves from Rowling, the nonprofit Harry Potter Alliance focused its attention on trans causes, and artists offered free cover-up designs for unwanted Potter tattoos.

While Rowling’s tweets feel distressingly familiar if you’ve encountered the recent trend of British transphobic propaganda online, Radcliffe’s words come from a place of well-informed allyship. Rather than centering himself, he focuses on the potential impact on transgender people, and guides cis/straight allies toward resources on the Trevor Project site. In the process, he’s distancing himself from a professional relationship that defined his career since the age of 11.

H/T to the Trevor Project