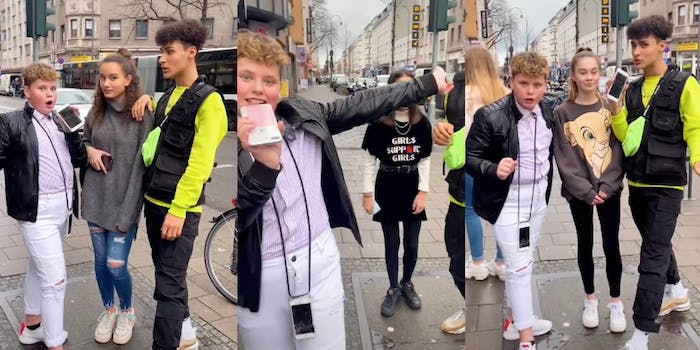 People are obsessed with this TikTok, despite having no idea what's being said.

When we say cheesy things like “some moments transcend language,” we’re usually referring to those tearjerker videos set to sad songs where lost dogs reunite with their owners or when a small child gets a hearing implant for the first time. But it can also be true of absolutely ridiculous TikTok videos, as many people online have learned this week.

A group of German teens posted a short video to TikTok that went viral, despite many people having absolutely no clue what they’re saying.

“Idk wtf they sayin but this is sending me,” user @glurmgler wrote in a tweet that has been shared thousands of times.

Idk wtf they sayin but this is sending me pic.twitter.com/0nf1BwmZJR

In the video, a sassy blonde boy interviews a variety of other children–who all match his energy–in the street.

The contagious enthusiasm of the sassy teens quickly had the internet sharing and liking away, despite most people being clueless as to what in the world was going on.

“I don’t know what the fuck they’re saying but girl I am living,” Twitter user @a_roach06 wrote.

mans is stanced up

Nice to know middle schoolers are still scary in 2020

Even Billy Eichner, known for his street interview-style game show, Billy on the Street, tweeted about the video.

“I FOUND MY CHILDREN!!!” he wrote, later adding, “Btw I have no idea what they’re saying so if it’s something terrible I’M SORRY.”

Btw I have no idea what they’re saying so if it’s something terrible I’M SORRY.

One of the only words able to be made out is “bitch.”

“I love how I don’t understand what they’re saying but now know that ‘bitch’ is used universally in gay circles,” Twitter user @iameldiablito wrote.

The video was also quick to get the meme treatment, made even better by the fact that so many people don’t even have the context of what the original TikTok says.

Users compared the children to everyone, from “Sims talking shit” to the Von Trapp kids.

“Augustus Gloop exposing Willy Wonka on the streets after being sucked up that tube,” Twitter user @ScorpioHole joked.

Augustus Gloop exposing Willy Wonka on the streets after being sucked up that tube pic.twitter.com/PEi9l5l3HR

Fortunately (or unfortunately, if you really love staying in the dark), a few good samaritans offered up their translating services to help everyone understand what was really happening.

The charismatic blonde kid was apparently interviewing girls to ask how many ex-boyfriends they’ve had.

And you know what? It’s actually even better with the translation.

The two teen boys seem to make a lot of videos like this, but if you want to watch the rest of them, you may have to learn German for yourself. Or just enjoy the chaotic energy while having absolutely no clue what’s going on–that works, too, bitch!