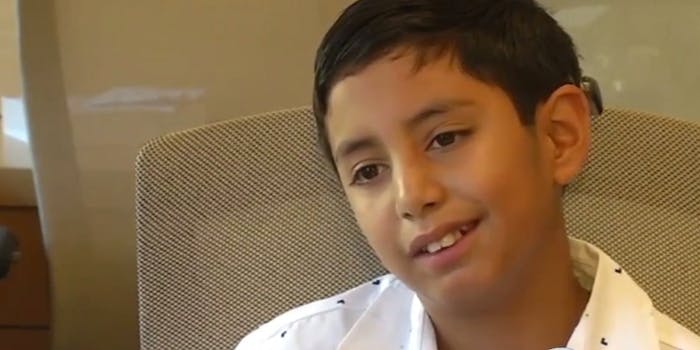 A young boy regained his hearing with the help of bone conducting implants made for the iPhone.

Nine-year-old Joshua began experiencing hearing loss at the age of three and ultimately lost most of his hearing. After five years of unsuccessful surgeries, he wound up at the Children’s Hearing Center at Stanford Children’s Health, ABC 7 reports. The hospital had a solution.

Doctors diagnosed Joshua with congenital cholesteatomas, a growth in the inner ear that causes discharge and odor, so traditional in-ear hearing aids were not a viable option. Doctors turned to a new device, the Cochlear Baha 5, an implant that’s fitted behind his ear and uses the bone in his head to conduct sound.

These types of hearing aids transmit sound through bone by converting noise into vibrations sent through the skull directly to the ear.

The Baha 5 family of hearing aids are the first to be built for Apple products. They wirelessly connect to mobile devices to stream content, so people can hear calls, music, and other sound on their iPhones and iPads without needing a separate device. A companion app controls the implants, so Joshua can modify volume, treble and bass, and customize settings for specific locations for the device to remember automatically.