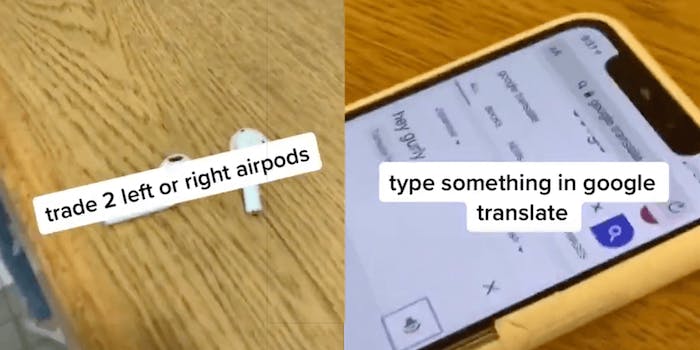 The days of passing paper notes are long gone.

Teens are harnessing the power of modern technology in order to secretly communicate when in school. And while previous generations may have had to rely on passing paper notes, Generation Z is utilizing cellphones and wireless earbuds to chat undetected.

One such teen on TikTok showcased this new method in a video that has since gone viral. A copy of the clip shared to Twitter that breaks down the process has already been viewed more than 2.7 million times.

Kids are swapping AirPods in class then using text to speech to ‘talk’ without talking 🤩🤩🤩 pic.twitter.com/moLxK1rzbv

The trick is relatively simple. First, teens exchange one of their Apple AirPod earbuds with another student. Then, using Google Translate, a message can be typed and transmitted verbally into the ear of the other user.

Reactions to the video included everything you’d expect. Millennials are praising the new generation’s ingenuity, while Baby Boomers and others harkened back to a simpler time of paper airplanes.

“Too bad they will never know the joys of passing paper airplane notes behind a teachers back… but then again, I doubt any kid these days knows how to make a paper airplane,” Twitter user @MetalGearSamMcC said.

Too bad they will never know the joys of passing paper airplane notes behind a teachers back… but then again, I doubt any kid these days knows how to make a paper airplane

jesus christ, they'll never know the terror of writing a crude note to your friend and throwing it across class, and it stopping short and landing near the teacher's feet

Some even went off on a tangent about the failure of the teens to use proper grammar.

“But they still don’t know the difference between ‘your’ and ‘you’re,'” Twitter user @CrazyJimP said.

The secret chat trick does appear to be spreading though. One user stated that he had seen the method used by students in his Sunday School class.

We dramatically under-estimate the problem solving abilities of a group of teenage girls by a lot. https://t.co/loqx6kt0EB

Brilliant! This is the type of problem solving we need in the world!

Multiple people went on to share the methods they used when in school in order to communicate under-the-radar. TI-83 calculators anyone?

The reminds me of back when I was in high school I made a really long link cable for the TI-83 Plus and wrote a simple instant messenger app. We ran the cord through our clothes so the teacher couldn’t see it and had conversations during class.

Back in my day we just passed around our TI-84s, but sure 🤯

That’s goddamn genius. When I was in high school the smartest kid printed up a fake Coca-Cola label with the answers in tiny white text and wrapped it around the bottle. Stone Age.

It appears some schools have even gone as far to essentially ban both phones and wireless earbuds in order to crack down on student’s communication covertly.

“At my school, phones go in the locker in the morning, and you don’t get them out till time to go home,” Twitter user @HesstThe said. “We have also banned air pods in the hall and classroom unless teacher directed to use them.”

At my school, phones go in the locker in the morning, and you don't get them out till time to go home. We have also banned air pods in the hall and classroom unless teacher directed to use them

Of course, many asked why the method was even necessary at all when students could just text instead. Many of the criticisms were met with an “OK Boomer.”

Isn’t it easier to just text…?

Just text since you’re already typing it in

The video highlights just one of the many methods students use in order to beat the boredom of the classroom. Even Google Docs has become a tool in the arsenal of young kids looking to talk in school.

Given the rapid development of technology, we can only expect digital note-passing to become even more impressive in the coming years.