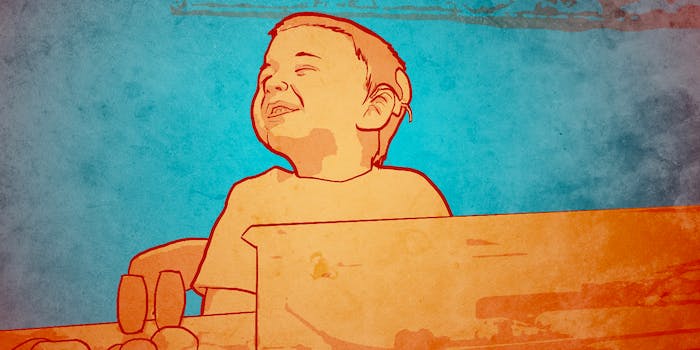 Are they cute videos that celebrate connection—or do they glorify audism?

When Ahavah Cook’s son Elijah was an infant, he was diagnosed as profoundly deaf. Cook made the decision for Elijah to have cochlear implant surgery, in which an electronic medical device would replace the function of his damaged inner ear. When his implants were activated in the doctor’s office, a camera crew was there to capture Elijah’s reaction.

In the video, Elijah—just 6 months old and all cheeks and fuzzy hair—stares at his mom in awe, before smiling and cooing. It is the first time he would hear.

Since the video was posted in 2015, it has received over 2 million views. And it’s not the first, or last of its kind. It’s part of a popular genre of YouTube videos of babies hearing for the first time. If you like cute, smiling babies, the videos can be addicting. The reactions span the emotional range from reserved smiles to joyful sobs—each one a small moment of connection between parent and child.

Comments on these videos are mostly positive. People ooh and ahh over the child’s responses to their mother’s voice. But every video has some detractors. The video of Elijah has 77 down votes.

It would be easy to attribute the down votes to the immutable laws of the internet, which state “For everything, there is a hater.”

But there is more behind those down votes than just random negativity: It’s a fight for a culture and a people who feel under attack.

Ruthie Jordan is a Deaf activist and member of Audism Free America, a grassroots organization which advocates for “Deaf American rights, cultural resurgence, and seeks primarily to challenge the ideological foundations of audism in America.”

Jordan defines audism, a term first coined in 1977 by Dr. Tom Humphries, as the belief that a person is superior because of their ability to hear—and that a life without hearing is somehow less. She told the Daily Dot that the Deaf community’s response to these videos of children hearing for the first time is deeply divided.

“Some Deaf people are being colonized by [the] medical [industry]’s perspectives” she said, “and other Deaf people who value our Deaf culture” disagree with these videos. They glorify audism and “violate Deaf babies’ human rights and their parents’ rights,” she explained.

But Cook, whose parents and in-laws are also Deaf, disagrees with Jordan, noting that it’s not about audism, or human rights—she just wants more options for her son. Cook said that in the past she has worked as a placement specialist helping Deaf people find jobs, and that “it’s just the reality that unless you are finding work in the Deaf community, it’s hard out there.”

Cook says Elijah continues to do well after surgery. According to a 2015 study in F1000Prime Reports, complication rates for cochlear implants “have decreased with smaller surgical incisions, increased experience, and improvements in device design, and are now generally held to be approximately 11.8 percent for minor complications and 3.2 percent for major complications.” Cooks’ decision to have the surgery was hardly rare, either; out of 1 million Deaf people in the U.S., about  324,200 have had cochlear implants, as of 2012.

But there is perhaps more to these videos that meets the eye, according to Jordan. She believes the videos not only spread the message of audism, but that they also ignore some of the risks associated with cochlear implants. She says these include: “language deprivation, damage to our organic body, and [limits to a] Deaf child’s freedom,” adding that implants “often make a Deaf child’s face paralyzed” and can cause “numbness, nerve damage, or injury in the head if they don’t wear cochlear implant outside of the head. It also does cause infection, illness, and death.”

A documentary about Helen Willis, who received cochlear implants at the age of 3 following hearing loss after contracting meningitis at age 2, shows the flip side of those viral videos. In the documentary, Willis explains, “The auditory input that the cochlear implant provides is very impoverished.” She said that in order to even attend college, she has to have two notetakers—one transcriptionist and one summary notetaker—because all of her brain energy is used up just trying to make sense of what she hears.

And beyond health, Jordan notes that with cochlear implants and hearing aids comes a loss of focus on American Sign Language (ASL) and less interaction with the Deaf community, which often provides a positive support system for Deaf children.

In a TEDx speech at Gaulladet University, Dr. Peter Hauser argued that when a Deaf child doesn’t have access to ASL, their language skills suffer and they lack resilience. Hauser studied the effects of audism on Deaf people through a study that asked people to align Deaf and hearing with the concepts of good and bad.

The results of the study showed that people who’d had ASL training and were immersed in Deaf culture were less likely to think that their hearing loss was bad.

It may seem an obvious conclusion, but studies also show that Deaf and hearing-impaired children often suffer from lower self-esteem. Giving children a positive foundation for coping with Deafness is important, and Jordan believes that resiliency is not found through cochlear implants. Cochlear implants, Jordan argues, provide just the opposite message—it teaches Deaf people that something is wrong with them and that they need to be cured.

But for Cook, who has multiple Deaf family members, the realities are a lot more personal. “I hear a lot about discrimination toward Deaf people,” she said. “But what about how they treat my son? It’s like I’m being discriminated against for having cochlear implants.”

“For me,” Cook adds, “it is about what is best for my son, and I want him to be proud of who he is, cochlear implants and all.” Cook also noted that her approach to her son’s learning includes ASL and that her son’s doctors and therapists support that decision.

When she posted the video of her son on YouTube, Cook knew how her Deaf family and her Deaf community might respond, and says that since Elijah has been born, there have been some tense moments. But she doesn’t regret her decision. She explained, “I’m not going to hide who my child is.”

For her part, Jordan says that if she had one message to send to parents with Deaf children, it’s this: “Congratulations [you] have a Deaf baby! It is your gift to open your soul, and please learn sign language to gain your love relationship with children. “

Update 2:18pm CT, June 13: This article was updated for context and clarity.

Correction 4:52pm CT, June 13: The Children’s Hospitals and Clinics of Minnesota had no role in producing the viral video. We regret the error.