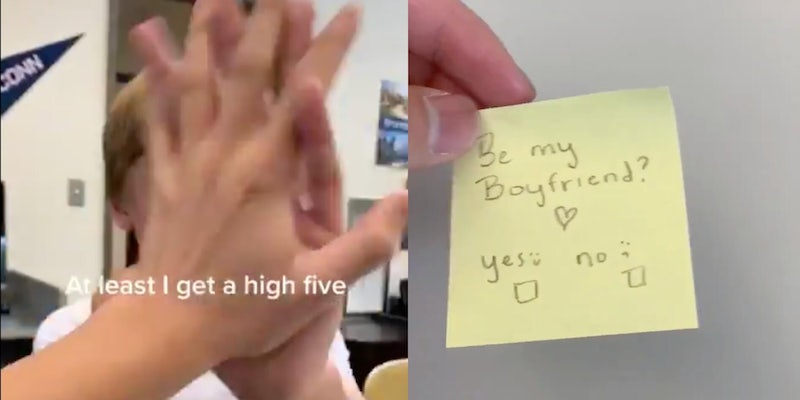 Popular TikTok teens accused of pretending to be gay for clout

They went viral for their cute relationship.

It has not been an easy week for people who stan strangers online. It was revealed Friday that popular Twitter account @emoblackthot was being run by a man rather than a Black woman like everyone had thought. Now, teen boys who rose to fame on TikTok for having a cute romantic relationship are being accused of pretending to be gay for clout.

“I found the cutest Tik Tok thread and the last one makes it even cuter,” @koalatreat wrote. “I’m sobbing.”

The four-part video, documented in the thread, shows the progression of a teen couple’s relationship. In the first video, the assumed shyer boy who is being filmed by the other boy refuses to hold his hand. Still, they wait for each other after class; pass a note that reads, “Be my boyfriend;” and go on what looks like a Chipotle, ice cream, and movie date. By the end, the boys are happily holding hands.

The TikTok videos were uploaded by user @vulang, with romantic songs playing in the backgrounds.

The progression of the relationship was cute enough to “make a bad bitch cry,” as @koalatreat put it. Indeed, hearts were melted across the Twitter-verse, with many yearning for a similar relationship.

This is so nice
Im so sad I couldn’t experience any of this but I’m happy pic.twitter.com/OlpeazOelj

when that last video finishes pic.twitter.com/Pt8S5yEcy7

Only, it’s not real. “Yall they’re not even together they’re just two heteros being gay for clout like come on now,” Twitter user @suhtalite, a classmate of the boys, wrote in a now-deleted tweet. One of the boys later admitted to pretending but said they were pretending in order to poke fun at lovey-dovey social media couples, not for clout.

Suhtalite shared a follow-up video (also now-deleted), in which they continue to call out the couple. “It really bugs me,” suhtalite says. “I would understand if he just like stopped but I love how he continues to go on with this joke.”

In fact, suhtalite says, the boys are “literally lowkey homophobic and make fun of the fact that people are gay.”

“Everyone’s calling it cute but is it really cute when they find out that you’re actually hetero and using gays and exploiting the fact that people love to see cute gay couples to your advantage,” suhtalite says. Suhtalite added that people who think they are lying can DM them for receipts.

According to a DM screenshot shared by the whistleblower, vulang (the boy recording the TikTok videos) claimed the other boy’s girlfriend is the one in the videos, not him.

“I edit and direct the videos for them, but she didn’t want to show her face, sorry for the misunderstanding,” vulang wrote in response to a message asking him to apologize.

Suhtalite removed their “exposing” tweets after vulang “publicly apologized” on Instagram. Vulang wrote that he was sorry for making videos that were insensitive, especially to the LGBT+ community.

“Centering videos around two guys created the image that we were gay, when we weren’t. I now see how my videos created a false hope for those struggling, whether it be with their sexual orientation or simply any relationship.”

Vulang says they created the videos to “satirize highly romantic videos all over social media.”

“I understand better now that oftentimes jokes can still be offensive whether intentional or not,” vulang wrote.