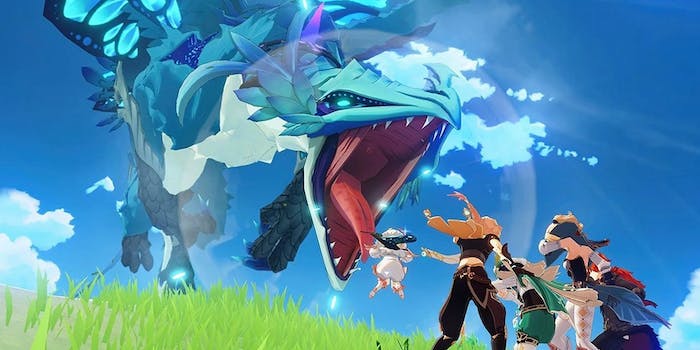 #BoycottGenshin is trending on Twitter, as fans criticize the design of 'hilichurl' monsters.

The #BoycottGenshin hashtag is spreading fast among gamers on Twitter, although it’s not actually an organized boycott. People are using the hashtag to criticize elements of the popular fantasy game Genshin Impact, starting with the design of a certain monster species, the hilichurls. Described as a sentient but “primitive” race of mask-wearing humanoids, their design attracted backlash thanks to a behind-the-scenes video. A clip shows a hilichurl animator working from footage of Native American dancers, suggesting this was a direct inspiration for the monster’s design.

One viral tweet offers gamers an email template to send complaints to Genshin Impact‘s studio, miHoYo. Among other issues, the template criticizes the hilichurl designs, highlights an overall lack of dark-skinned characters, and mentions the game’s widely publicized security concerns. (It also accuses the game of including pedophilic content, referring to a scene where an adult NPC professes his love for a child, but this may just be the result of a dialogue error.) However the most widespread criticisms are aimed at the game’s treatment of race and ethnicity, with most characters being white or light-skinned, while a race of antagonistic monsters seemingly drew inspiration from indiginous cultures.

Since all fantasy stories draw from real-world sources, this isn’t an unusual kind of problem. Lord of the Rings has long been criticized for its Eurocentric worldbuilding and implicitly racist role for non-white “Easterlings” and “Haradrim,” while Dungeons and Dragons recently overhauled some of its more offensive character designs.

In a more general sense, it’s pretty common to see elements of indigenous cultures repurposed for “wild” or “alien” characters in mainstream pop-culture. Genshin Impact takes place in the fantasy world of Teyvat, featuring anime-influenced character designs, and locations inspired by countries including China and Germany. Some locations are more eclectic than others: For instance one region is a mix of Indian and Middle Eastern sources, which some gamers find irritatingly nonspecific.

Genshin Impact was produced by a Chinese studio, with a primarily Chinese creative team. And as an internationally popular game, it was received in different ways by different audiences. Along with tweets critiquing the game, the #BoycottGenshin hashtag includes backlash against the criticism, with some fans suggesting this is an exclusively Western controversy. There’s also some inevitable mockery of perceived “SJW” opinions in gaming fandom, with some commenters objecting to the basic concept of anti-racist critique. In turn, this all plays into longstanding conflicts about problematic character design in mainstream video games, where white (and usually male) protagonists remain the norm.

We’ve reached out to miHoYo.