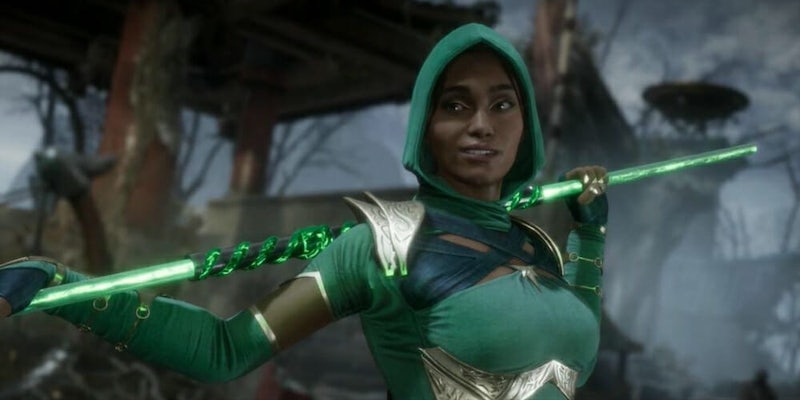 Straight men are sad that the female characters don't cater to their horniness.

Gamers are back on their bullshit, this time because they think the women in Mortal Kombat 11 aren’t hot enough, and some of them are even blaming socialism. We wish we were kidding.

Most of the people digging into the new Mortal Kombat game are probably enjoying it, as Metacritic has an average critic rating of 83. However, a 3.1 score from users—and the frequent use of the terms “SJW” (social justice warrior) and “ugly women” in those reviews—tell a different story.

On April 18, William Usher of the blog One Angry Gamer tweeted, “Everyone is laughing at the ugly female faces in #MK11,” and complained about what he seems to feel are prudish outfits. “Expect #MK12 to go full #BurqaBattle mode for the female characters,” he wrote.

Other folks who were upset by the redesigns of female characters in Mortal Kombat 11 chimed in, baffling the large swath of people who play video games because they enjoy playing them, and not because they like looking at hot women. One Twitter user with the display name “FightingSJWCensorship” blamed socialism, game journalists, and third-wave feminism for bringing about “shit female characters like these.”

It’s being downgraded, why cant you see that? Mortal kombat always had their females looking like attractive. You’ll just sit there and let politics fuck your games up?

A rational person looking at these tweets might think that this is a massive overreaction, and they would be correct. The digital ladies in Mortal Kombat 11 are still plenty attractive, and even if they weren’t, they’re characters in a fighting game, not performers in pornography. Their purpose is not to be masturbated to, but to be fought with.

This attitude that women in video games must be attractive is reflective of an entitled expectation that women in games are, in no small measure, there for straight male sexual entertainment. Baraka can have a mouth full of needle-like teeth without stirring controversy because it’s not controversial for a man to be unattractive. But Sheeva, half-human half-dragon, having a slightly more masculine jawline and wearing actual armor is apparently an image so disturbing that it is tantamount to betrayal.

This entitlement goes so deep that when the expectation of a certain level of sexiness isn’t met, accusations of censorship and “SJW pressure” are made as if that is the only explanation. When it came to light that a romantic petting mini-game was removed from Fire Emblem Fates for the U.S. release, and a story arc in which a lesbian was given a potion to make her like men was changed, gamers virulently harassed the then-spokesperson for Nintendo’s Treehouse over the “censorship” until she was “terminated.” When a revealing bikini was replaced for a 13-year-old character in the  Xenoblade Chronicles X, gamers on 8chan rallied to inundate Nintendo with letters against that “censorship,” too. In an interview with Kotaku, the executive director of Xenoblade Chronicles X said of the changes made to the game for the American release, “I really didn’t mind much at all, actually.”

Companies making or localizing games in a way that does not cater to the way a particular (insensitive, misogynistic) audience demands are not engaging in censorship; they are simply marketing to wider audiences. Ironically, the same people who claim to be fighting for free speech in video games are now trying to punish NetherRealm Studios for making a game they’ve deemed offensive. But what they consider “offensive” is reducing a character’s visible cleavage and slightly changing her facial structure.

When Gamergate sites like One Angry Gamer claim Mortal Kombat 11’s female characters are being “de-sexualized,” they’re arguing that women’s attractiveness is purely defined by the male gaze. Take Sheeva’s redesign. Mortal Kombat 11 gets rid of her traditionally skimpy armor and focuses instead on her strong, taut form. Combined with her spiky mohawk, she gives off powerful dyke vibes. But One Angry Gamer’s Usher either doesn’t realize this or doesn’t care, because he claims she “looks like she just got done sniffing a foul smelling fart composed of rotten Cheetos and stale Dr. Pepper.” If a female character isn’t personally attractive to him and other men… she must be a sexless monstrosity.

That’s bullshit. A character can be attractive without being designed specifically for cis straight men’s desires because straight men aren’t the barometer for who is sexy for whom. Attractiveness comes in many forms. Frost, another queer-coded female character, has a boyish frame and a blue pixie cut that looks unmistakably sapphic as hell. Gamers may not approve of the look, but that doesn’t make it any less hot. It just means some male gamers don’t like it.

Granted, Mortal Kombat II isn’t exactly a sexy queer haven. In fact, NetherRealm Studios left out the series’ first queer character, Kung Jin, in the new game, even though he was just introduced in Mortal Kombat 10. Two other characters seemingly in a lesbian relationship, Mileena and Tanya, are missing from the game as well. And while some of the game’s characters certainly look queer, or at least less traditionally “feminine,” every woman is still somewhat conventionally attractive by normative standards. Sonya Blade may have boyish hips, a shorter bust, and more realistic military getup that doesn’t expose her midriff, but she’s certainly still designed to look attractive. The game’s men, on the other hand, are made to look gruesome, ferocious, and powerful: the ultimate male power fantasy.

The response to the women of Mortal Kombat 11 is emblematic of the cultural tug-of-war in video games over who is being “catered to.” One side sees the bikinis of yesteryear’s Mortal Kombat as catering to straight men, the other sees the new outfits as catering to feminists. While a vocal minority of gamers might claim that changes that “cater to SJWs,” like the ones made to Fire Emblem Fates, chase away “real gamers,” that game, in fact, had the biggest stateside debut of any Fire Emblem game prior. While some bitter gamers are calling Jade ugly, fans in the Mortal Kombat subreddit are calling her beautiful and posting the same picture. It’s hard to believe that games are being ruined by “SJWs,” because they’re not. More people are playing video games than ever before, and some gamers are mad that it’s not just about them anymore.