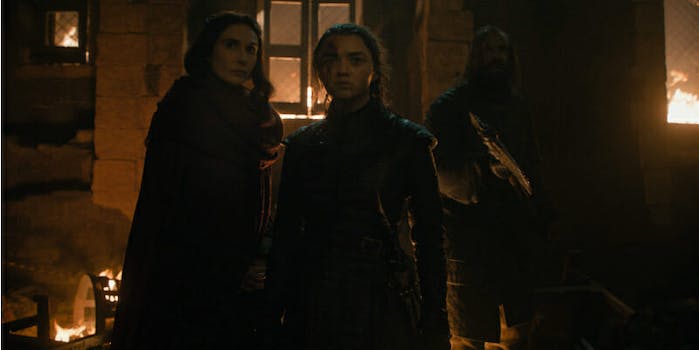 Everyone’s doing ‘the Arya,’ a ‘Game of Thrones’-themed dance craze

The viral move was thought up by Twitter users @Chuckisdope, @itsmegangage, and @GBDRN. They call it “the Arya,” and it quickly blew up online in tribute to one of television’s most badass kills.

“Immediately after watching episode 3 of Game of Thrones on Sunday night, we’re all riled up, and Chuck starts doing the dance move and says, ‘This is the new dance now,'” Gaby Duran, the original poster of the viral craze, told the Daily Dot. “I immediately started recording, posted it, and the rest is history!”

The move is simple. The performer throws one arm in the air—yes, Arya is left-handed, but your left hand is not required—before making a motion like they are dropping something. Then, they abruptly switch to their other hand and finish with a forward, thrusting motion.

That’s it. It’s beautiful, simple, and oh-so-current. In no time, people all over the internet were performing the Arya.

The move is also being called the “not today,” in honor of one of Arya’s most badass lines. They were the last words she spoke before darting off to be Westeros’ greatest hero.

“We’ve received lots of replies of people all over the world doing #TheArya,” Duran told the Daily Dot. “This is definitely more about culture than it is about hype.”

Some people are even paying tribute to the move without actually performing it. They’re saving it to whip out at a classy party, obviously.

Please don’t do the Arya challenge. Y’all will injure yourselves

Others have goofier takes on the move, incorporating more realistic circumstances for those of us who aren’t trained assassins. They dropped hairbrushes, spoons, and keys in lieu of knives.

We still have three episodes before Game of Thrones is finished for good. Thanks to the people of Twitter, we now have some epic moves to remember the Night King’s final moment, long after the last episode airs. We’ll be doing the Arya till the long night comes again.