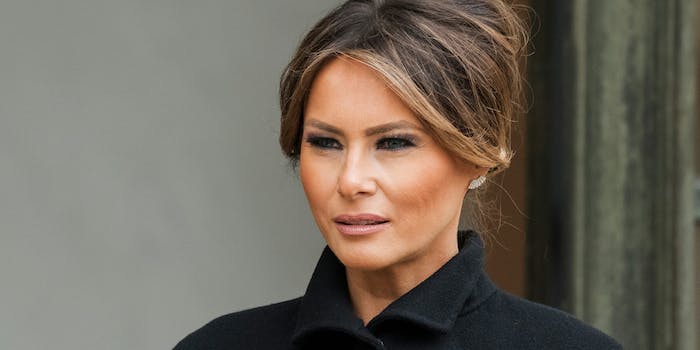 ‘Fake Melania’ conspiracy theory is back after Trumps visit Alabama

Yup, the Fake Melania conspiracy theory is back.

While President Donald Trump visited Alabama to observe damage from a devastating tornado, conspiracy theories that a body double for First Lady Melania Trump was by the president’s side swirled on Twitter—again.

Twitter users noted that something looked amiss in photos of the First Lady and President Trump visiting a memorial for the 23 people who died during last week’s natural disaster.

Most people pointed out that the shape of her chin looked odd in some photos from the visit.

Ok People! Let’s list all the ways #FakeMelania is different than #RealMelania. What the hell—it’s the weekend, we all deserve some downtime.

Some mentioned she looked a bit shorter than usual. But, as Esquire pointed out, the First Lady faced criticism for wearing high heels when headed to Texas for a briefing about damage from Hurricane Harvey in 2017. The First Lady was wearing sneakers on the trip to Alabama.

I know everyone likes to laugh about how stupid the #FakeMelania conspiracy is.
So let’s just look at these two pictures from yesterday. How does a human being shrink a good five inches in a matter of hours? pic.twitter.com/G2wx9MiCfj

Others pointed out that a woman (presumed to be a Secret Service agent) who has accompanied the First Lady on several trips looks very similar to her, just a bit shorter.

The theory that the first lady uses a body double for public appearances first surfaced in 2017 with Twitter user @JoeVargas. Viewing video footage of a press event, @JoeVargas thought that Melania didn’t look quite right.

Okay, it’s most likely the real Melania Trump, but it’s easy to see why posts like this go viral so quickly.

The First Lady rarely speaks with reporters and has disappeared from public view before, notably for an unannounced hospital stay that kept her out of the spotlight for almost a month in 2018.

The rumors got so bad in 2017 that the First Lady’s spokeswoman, Stephanie Grisham, made a statement to CNN calling the claims “ridiculous.”

But the Fake Melania theory also follows a sort of narrative that we’ve created about her. Since Donald Trump was elected, the general air of mystery surrounding the First Lady feeds into rumors that she doesn’t like being around her husband. Whether it’s video footage of her refusing to hold his hand or her decision to wait five months to move into the White House, speculation about the First Lady and her relationship to her husband abounds.

Other footage of the First Lady taken during the Alabama trip certainly looks like the Melania Trump we’re used to. In her tweet from Friday, video of the Trumps at the disaster site shows a very familiar First Lady.