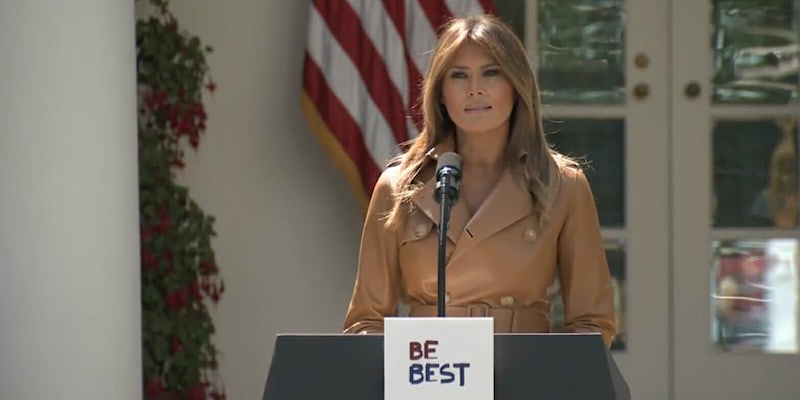 Everything she does makes people wonder.

First Lady Melania Trump generally shuns the spotlight with the same proclivity that her husband seeks it. But even with her time in the White House mostly spent out of the public eye, she’s been the subject of multiple controversies and conspiracy theories. Some seem to be the result of missteps from her and her staff, while others are conspiracy theories based on little except confirmation bias.

Melania isn’t the first First Lady to be the subject of innumerable conspiracy theories, of course.

But Mrs. Trump is much less visible than most other First Ladies, with her personal beliefs and wishes for the office being almost completely a mystery. That’s left conspiracy theorists to fill in the blanks, using outlandish plots to explain her absence, her strange public statements, and the aura she exudes.

With the strange saga of the jacket Mrs. Trump wore to a child internment facility in Texas having turned into a huge story, it’s worth taking a look back at previous Melania incidents, both real and imagined, and seeing where it ranks among them.

When walking onto a plane at Andrews Air Force Base to visit a facility in Texas (which turned out to be a shelter for unaccompanied minors, rather than separated children), she wore a $39 Zara parka with “I DON’T REALLY CARE, DO U?” written on the back in large, white letters.

The image was so outlandish that many people assumed it was a hoax. But it was confirmed as real when she wore the jacket again, this time leaving the plane to go back to the White House.

Opinions varied as to why she wore the jacket, what the message really was, or who it was intended for, leading to conspiracy theories, of course. Some people thought she wore the jacket as a distraction to take the heat off a policy that resulted in enormous public blowback.

Other speculation was that she wore it to display how she really felt, and dispel any notion that she isn’t in lockstep agreement with Donald.

It didn’t help that the White House offered multiple explanations, with Mrs. Trump’s spokesperson first tweeting that it was “just a jacket” with no hidden message, and then the president himself following a few hours later with a tweet that the message was meant for the “fake news media.”

"It's a jacket. There was no hidden message," Melania Trump's communications director Stephanie Grisham said.

It wasn't a hidden message; it was right there on her back. It was an intentional choice, even if its effect may not have been intentional. https://t.co/aXUDWMAKtZ

It’s also not clear why she’d wear a hooded jacket on an 80+ degree day in Washington, D.C.

But for a First Lady with an impeccable sense of fashion to pick this specific garment to wear twice, it seems likely that this didn’t take place on accident.

Shortly after the “Be Best” plagiarism kerfuffle, Mrs. Trump had minor surgery to treat a kidney ailment. That surgery and its recovery played a role in what would become a controversy that consumed the White House for almost a month: her seeming disappearance.

DO YOU KNOW WHERE MELANIA IS? pic.twitter.com/5zVR6hYNUa

Mrs. Trump wasn’t seen in public from May 10, when she accompanied Donald Trump to meet two hostage freed from North Korea, to June 4, making an appearance to greet military families.

The First Lady’s apparent vanishing spawned numerous conspiracy theories and tweets about her leaving the president, recovering from cosmetic surgery, or having turned herself in to the Special Counsel’s investigation. It also led to blistering tweets from the president, outraged over the media’s treatment of his wife.

As with other controversies, the White House couldn’t decide if it wanted to stoke the fires, or put them out, as Melania’s spokesperson claimed that Melania was recovering from surgery and working as normally, while the FLOTUS Twitter account put out a statement that read almost verbatim like something Donald himself would tweet.

This wasn’t even the first time Mrs. Trump took herself out of the public eye, as she made no appearances or statements for over two weeks in January after news broke about the president’s hush money payout to Stormy Daniels.

Has Melania already left Donald, necessitating the use of a body double given plastic surgery to look like the real deal?

That was the crux of a conspiracy theory that hit in October, after Mrs. Trump was filmed standing next to the president while he pontificated. She was wearing large glasses and a trench coat, and something about her appearance (along with Trump making a reference to “my wife Melania who happens to be right here”) struck people as not quite right.

A Facebook user put a screen capture of that appearance next to a picture of Melania from another appearance and compared them. Sure enough, her nose, hair, and facial structure looked “different.”

Will the real Melania please stand up? Is it me or during his speech today a decoy “stood in” for Melania??…

The reasoning was that if Melania had been replaced, we don’t know her well enough to be able to tell the difference. It played perfectly into the image she’d created—aloof, quiet, and walled off behind oversized shades. And we already “knew” that Melania and Donald have a terrible marriage. Is it really so outlandish that she’d leave him, and the White House would want to avoid the embarrassment of admitting it?

It might not be outlandish, but it’s also not supported by evidence. In that, it’s a lot like the Michelle Obama “whitey” tape—an accusation based only on what some think we know about a public figure.

Given the phalanx of connections between the Trump campaign and Russian intelligence, it’s not a stretch to think Melania Trump might be involved as well.

Russia has always played the long game so could it be possible?

So it’s no surprise that a conversation she had with Russian strongman Vladimir Putin at the G-20 summit led to a conspiracy theory that she’s actually a Russian agent who has gotten the deep cover placement of a lifetime. Or maybe Putin was trying to recruit her.

After all, she speaks five languages, is at home with powerful people, and has unprecedented access to the man with more secrets and power than anyone in the world. She’d be a perfect intelligence asset, right?

There’s a number of problems with the conspiracy theory, the most notable being that Melania hasn’t been connected to any of the Russian dealings that Donald or his adult children have had. She’s also not Russian and doesn’t speak Russian.

Like any of these other conspiracy theories, it’s possible. And given how little we really know about Melania, it might not be surprising.

But like the rest of these, it’s also probably not true.