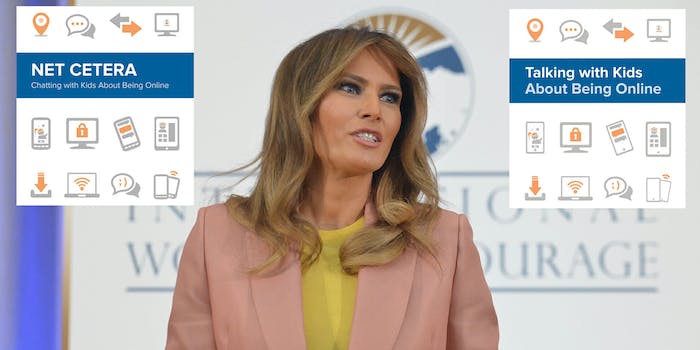 This wasn't the only snafu the 'Be Best' campaign faced since it's official launch on Monday.

First Lady Melania Trump‘s “Be Best” initiative had a bit of a rocky rollout on Monday, and it now appears that a booklet published as part of the campaign is extremely similar to one published by the Federal Trade Commission (FTC) four years ago.

lmao… the White House/Melania Trump Be Best pamphlet about your kids being online is almost the exact same thing that the FTC published in Jan. 2014:

The two pamphlets have the same blue and orange theme, similar graphics, and tips for parents about protecting their children online.

The First Lady’s “Be Best” pamphlet does include a new page, where Melania Trump presents it as a way for parents to “join me and commit to promoting values such as encouragement, compassion, and respect, both online and offline.”

There are some other small changes as well. On page 11, a section about cyberbullying, the “Be Best” pamphlet has added a few things, such as encouraging kids to “speak up” about it. Cyberbullying was one of the major themes in the First Lady’s initiative.

The Office of the First Lady said in a statement that Melania Trump “agreed to add Be Best branding” to the FTC pamphlet “in an effort to use her platform to amplify the positive message within.”

The office also accused the “opposition media” of lobbing “baseless accusations towards the First Lady and her new initiatives” for highlighting the similarities between the two pamphlets.

The FTC’s Associate Director for Consumer and Business Education told VICE News that some version of the pamphlet has been published since 2009.

This wasn’t the only snafu the “Be Best” campaign faced since its official launch on Monday afternoon.

During the First Lady’s speech, where she stood in front of a podium with BeBest.gov written on it, the website for the initiative led to a “404 error” page. The website launched shortly after the speech was finished.

Also, numerous people online pointed out the irony of the First Lady’s focus on cyberbullying given that her husband, President Donald Trump, uses Twitter to mock and belittle political opponents and those he disagrees with on a consistent basis.

This article has been updated to include a statement from the Office of the First Lady.