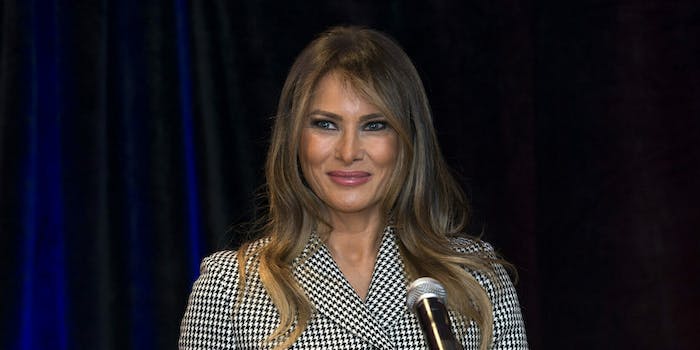 Photo of Melania Trump ‘gardening’ gets the meme treatment

A year-old photo of Melania Trump pantomiming gardening in Michelle Obama’s vegetable garden is getting a second life—as a meme.

Chrissy Teigen was among the first to contribute to yet another meme of the first lady.

these look exactly like my workout soles. because i work out as much as this chick gardens pic.twitter.com/s2mwLKRK7b

Twitter users took the opportunity to mock the first lady’s totally natural, not at all contrived stance.

“I love the outdoors.” pic.twitter.com/gZ002fdqKf

When your H-1B visa application says your special skill is "r̶i̶c̶h̶ ̶m̶e̶n̶ gardening" but you hate dirt. pic.twitter.com/ZEtUhZRj1Q

me making sure the barista sees me put money in the tip jar pic.twitter.com/Sao2B0DkfR

This isn’t the first time Trump’s been criticized for the gardening outfit. Her tartan top sparked outrage for its $1,380 price tag when the photos first circulated last September.

“I question the morals and wisdom of someone who spends $1K+ on a gardening shirt that looks like something you can buy in Target for < $20,” one user wrote.

I question the morals and wisdom of someone who spends $1K+ on a gardening shirt that looks like something you can buy in Target for < $20.

Worker earning federal minimum wage working 40hours/week: monthly after tax income would be less than the cost of this casual work shirt.

Last month, Trump came under fire for wearing a jacket with the words “I DON’T REALLY CARE, DO U?” scrawled on the back before her visit to a shelter for immigrant children at the Texas-Mexico border.