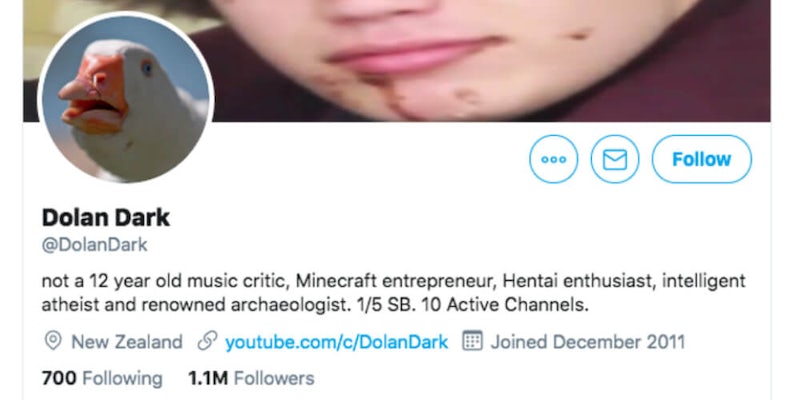 Popular YouTuber and shitposter Dolan Dark’s Twitter account was suspended after the social media site fell for his a joke, claiming he’s only 12 years old.

Nobody knows much about who Dark actually is. His profile picture across platforms is a concerned duck–probably not him–and his YouTube channel is mostly comprised of meme videos he’s edited together from existing content.

So when Twitter’s attention was drawn to the fact that Dark referred to himself as a “12-year-old music critic” in his bio, it’s almost understandable that it took down his account. According to Twitter’s terms of service, you have to be at least 13 years of age to use the site. Yet, anyone who read the rest of the bio or was somewhat familiar with Dark would’ve known it was a joke.

C’mon, Twitter. You can’t be 12 and a renowned archaeologist; this isn’t Legends of the Hidden Temple.

While Dark’s over 1 million followers were initially frustrated his account had disappeared with no explanation, they had some fun with the whole thing as soon as they figured out why.

“He should be fine he’s 50 in human years,” one Twitter user wrote, along with a duck to human age conversion chart. Another pointed out that if Dark were really 12, he would have been 3 or 4 years old when he first made the account in December of 2011.

“Dolan Dark just got suspended off twitter so I’m here to establish myself as the new meme king of New Zealand,” another wrote, willing to take Dark’s place as an established meme king, who claims to be from New Zealand.

He should be fine he's 50 in human years pic.twitter.com/vu5s13g4wU

With help from fellow YouTuber Keemstar, Dark’s account was eventually reinstated. Dark confirmed his bio was the source of the suspension.

“And yes i legitimately got suspended because twitter thought i was 12 years old because of my bio, pretty good meme honestly,” he wrote.

Dark also took measures to ensure he will never get mistaken for a tween ever again. His bio now reads, “not a 12-year-old music critic.”

While the suspension of Dark’s account was clearly a mistake, it’s reassuring to know that Twitter is keeping everyone safe by making sure anyone who might be a 12-year-old is banned from the site. It’s not like it has a pressing Nazi problem to deal with or anything.