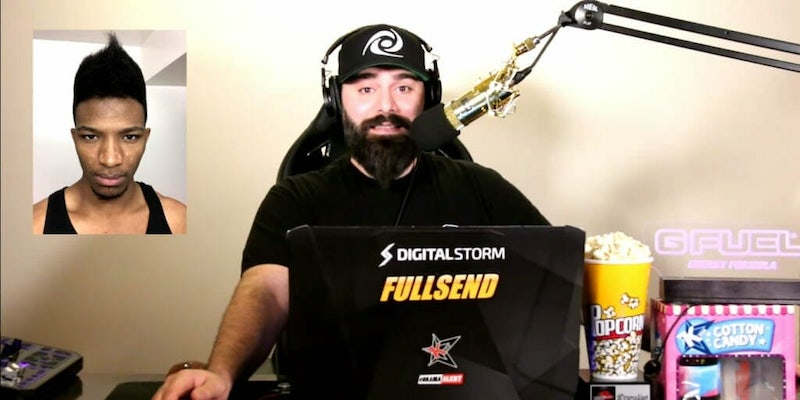 'I thought everything was fine.'

Nearly a week after Etika’s suicide was confirmed by New York police, YouTube gossip host Keemstar continues to face controversy for his perceived role in Etika’s death. But on Sunday, Keemstar tweeted a text message he said was from Etika’s mother insisting Keemstar was not to blame.

“I wish to inform Etika’s fans, friends, and viewers that Keemstar is not responsible for Etika’s passing and should not be held accountable for my son’s actions,” Etika’s mother wrote to Keemstar.

Keemstar’s role in Etika’s story began in May. After Etika previously threatened suicide on Twitter and live streamed his own police detainment, Keemstar interviewed Etika on his Drama Alert show.

During that interview, Etika, whose real name was Daniel Desmond Amofah, called himself the Antichrist and said, “I’ve come to purge the planet of all human life.”

During the interview, Keemstar asked Etika if he was having a mental breakdown and asked if Etika’s actions were simply a publicity stunt. At one point, Keemstar asked, “The cops took you to the mental place today. What happened?” Etika replied, “I went, I became God, and I walked out.”

After the interview, Keemstar revealed that Etika had blocked him on Twitter. Then, Keemstar called Etika “weak.”

After Etika’s death, some fans turned on Keemstar, calling him a “rat” and a “bitch ass fucking piece of shit” and accusing him of somehow causing Etika’s suicide.

Keemstar defended himself in a video saying, “A lot of people are looking for someone to blame for the Etika thing, and obviously I am the target they have picked. They’re pulling up old tweets where I’m making some banter jokes about what was going on with Etika and these oubursts. They’re like, ‘You’re to blame, Keem. You’re to blame.’ Nobody goes and shows tweets where I’m genuinely concerned because that doesn’t fit the narrative of ‘You’re the one to blame.’”

Keemstar said Etika was totally fine when they spoke privately, and Etika apparently referred to how much publicity he was receiving. Keemstar also said doctors believed Etika was stable as well.

Etika went missing last month after posting a vlog in which he said he was going to end his life.

In the video description, he wrote, “My time ends now, but if there is a way for me too, I’ll send you all as many blessings as I can from the other side.”

That video has since been taken down by YouTube because of its suicide ideation.

Keemstar has lobbied YouTube to restore Etika’s final video, and he said he’s mourning the loss of his friend.