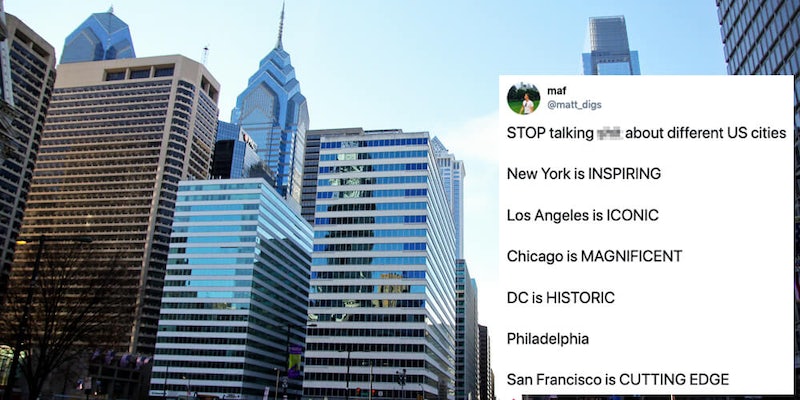 Will Jeremy Renner ever win?

Thanks to meme culture, there are certainly no shortage of clever ways to low-key ridicule, put on blast, or generally throw shade around on the internet. But that doesn’t stop the internet from constantly churning out new and creative memes, and one of the latest call-out memes to trend, “stop pitting [blank] against each other,” may very well be the most passive-aggressive so far.

Essentially, the meme lists people, fictional characters, places, or things with a directive to stop “pitting [blank] against each other,” in which each list item is given a typically positive adjective for one reason or another … except for one, glaring omission.

‘Stop Pitting Against Each Other’ meme

As you can see in a handful of the examples below, the “stop pitting against each other” meme is applicable to everything, including Black actors and characters from The Office to Dungeons & Dragons and scientific practices. (Our most sincerest of apologies to Michael B. Jordan and, uh, Toby.)

STOP PITTING BLACK ACTORS AGAINST EACH OTHER

STOP PITTING THE OFFICE CHARACTERS AGAINST EACH OTHER!

STOP pitting 5e classes against each other

stop pitting the sciences against each other

And then there’s this particularly savage burn at the expense of Kanye West, who apparently doesn’t even deserve our collective praise or scorn:

The origin of the “stopping pitting against each other” meme, however, appears to have derived from a much more wholesome tweet.

Following the release of Taylor Swift’s music video for “You Need To Calm Down” on June 17, Twitter user @SelOwnsMySoul tweeted the following, in an apparent reference to the lyrics “But we figured you out / We all know now, we all got crowns,” with the caption: “STOP PITTING WOMEN AGAINST EACH OTHER.”

A few weeks later, the Pop Crave Twitter account posted a similar sentiment that went viral, with the same caption: “Stop pitting woman [sic] against reach other,” which has since been retweeted over 300 times.

But by August, the “stopping pitting against each other” meme had taken on a mind of its own. And of course, there have also been plenty of Marvel-inspired variations of the meme to go around. (Our sincerest apologies to Jeremy Renner.)

STOP PITTING THE MARVEL CAST AGAINST EACH OTHER

STOP PITTING THE OG MCU AVENGERS AGAINST EACH OTHER!

Chris Hemsworth has a CROWN.

Tessa Thompson has a CROWN.

Brie Larson has a CROWN.

Chadwick Boseman has a CROWN.

Anthony Mackie has a CROWN.

Mark Ruffalo has a CROWN.

Jeremy Renner is a CLOWN.

Sebastian Stan has a CROWN.

STOP PITTING MARVEL ACTORS AGAINST EACH OTHER!!!

Over Labor Day weekend, the “stop pitting against each other” meme evolved yet again, when Twitter user @matt_digs posted a tweet that went crazy viral (with over 103,000 likes and 2,000 retweets at the time of this writing) that took a potshot at the city of Philadelphia—which this Philly-based writer will refrain from adding personal commentary to.

“STOP talking shit about different US cities,” he wrote, accompanied by a list of various cities that all received glowing adjectives–with the noticeable absence of the City of Brotherly Love.

The tweet inspired others to begin others using the meme format to roast other geographical locations, such as cities in Texas, Midwestern states, and so on.

Stop talking shit about the Midwest

University of Utah is a MEDICAL GIANT

Utah State is a MOUNTAIN PARADISE

Weber State is a PURPLE POWER

UVU is a COMMUNITY BUILDER

Although at least one person used it to rate vegan food:

If there’s one good thing to come from the “stop pitting against each other” or “stop talking shit” memes, it’s that most of us can agree that Daiya is not the best vegan cheese.