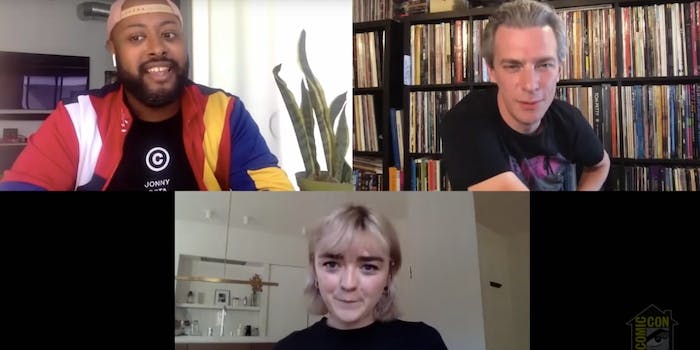 Virtual Comic-Con has a problem: It’s not actually entertaining

Does anyone actually want to watch prerecorded Zoom meetings?

At the best of times, San Diego Comic-Con is a marketing event. Attendees pay to be bombarded with ads, merchandise, and pop-up “activations” promoting new TV shows. Fans queue overnight for the chance to watch movie stars announce new products from Disney and Warner Bros. It’s one of the most transparently commercial places on earth, but you know what? It’s still a lot of fun, as proven by the vast number of people who pay for tickets.

Even if you aren’t one of the exclusive few who gets into Hall H for big panels like Marvel and Star Wars, there’s still a palpable sense of excitement in following live updates on Twitter, dissecting each new announcement with other fans. This excitement is notably absent from 2020’s “Comic-Con @ Home,” where every panel resembles a Zoom meeting with your coworkers. But it doesn’t have to be this way.

After weeks of uncertainty about how SDCC would handle the coronavirus regulations, the convention organizers announced Comic-Con @ Home on May 9. SDCC had just two-and-a-half months to organize an online replacement for one of the biggest conventions in the world. This was a gargantuan task, and I totally sympathize with the complexity of corralling hundreds of actors, artists, and filmmakers into supplying online content in the middle of a pandemic.

But as the Hollywood Reporter‘s Graeme McMillan put it, SDCC 2020 should be a lesson to other conventions. Not only is the basic website clunky and hard to access (their “online exhibit hall” is a near-unnavigable floorplan of the convention center?), but the most high-profile panels are actively dull to watch.

Live-streamed events just don’t measure up to in-person entertainment. This is a familiar and unavoidable problem during lockdown, uniquely highlighted by SDCC.

As a rule, the bigger the panel, the less information is actually shared. In a normal year, thousands of people queue to see Marvel actors charmingly refuse to discuss their films in any meaningful way. And everyone enjoys it! I’ve personally followed this stuff online with bated breath! Meanwhile, on the smaller industry panels, you get some more in-depth discussions about people’s careers and creative vision. This format works because Comic-Con’s A-list events are all about hype and star power—two things that just don’t shine through on Zoom.

No one wants to watch a tiled view of six movie stars staring into their webcams, waiting for a chance to talk. In fact, this business-meeting vibe just emphasizes the lack of real content on many SDCC panels.

To take one example, I’m a longtime Star Trek fan and the franchise’s SDCC @ Home panel was packed with actors and creators I admire. However, the format was an 80-minute Zoom call featuring a table-read of an episode that aired last year (why!?), some vague chat about future storylines, and a couple of announcements about upcoming spinoffs. This just isn’t a fun or sustainable way to recreate SDCC’s success online.

In order to provide an entertaining alternative to in-person events, other conventions must consider two factors: Format and content.

First of all, Zoom doesn’t work for what’s usually a glossy, star-studded event. Similar conventions should consider filming their panels in a format that’s already successful on YouTube. Maybe ask some actual YouTubers for advice!

Secondly, you just can’t get away with an hour of insubstantial waffling when you’re not in the hyped-up atmosphere of Hall H. If media franchises want us to get excited about their new projects, they need to offer something interesting, whether that’s behind-the-scenes featurettes, meaty interviews, or something more offbeat that capitalizes on personal charisma, like that viral video where Henry Cavill builds a gaming PC.

Because really, a YouTube playlist of hour-long Zoom chats is really not a good use of anyone’s time and energy.