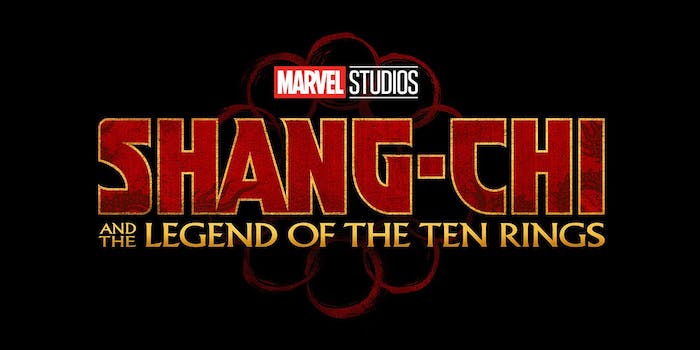 Shang-Chi and the Legend of the Ten Rings is one of the new franchises arriving in Marvel’s Phase 4, starring Kim’s Convenience actor Simu Liu in the title role. It’s the first Marvel movie to feature an Asian lead, and is expected to be a martial arts movie, echoing the kung fu origins of the Shang-Chi comics.

Due out in 2021, here’s everything we know about the film so far.

Simu Liu was openly rooting for a Marvel role long before he was cast, shooting his shot on Twitter for the role of Shang-Chi, and expressing interest in playing Namor or Sunfire as well. The 30-year-old Chinese-Canadian actor is best known for his role in the sitcom Kim’s Convenience, but he also has a history with action, performing as a stunt double in Heroes Reborn.

Marvel announced at SDCC 2019 that the film will also star Awkwafina and Hong Kong superstar Tony Leung (In The Mood For Love), marking Leung’s Hollywood blockbuster debut. He’s playing the Mandarin, a villain role that was (kind of) previously played by Ben Kingsley in Iron Man 3.

Launched in 1973, Shang-Chi stands alongside Iron Fist as a character created during the height of the 1970s kung fu movie trend. Like Iron Fist, Shang-Li was heavily inspired by Bruce Lee. Created by writer Steve Englehart and artist Jim Starlin, the character came about when Marvel obtained the rights to the villain Fu Manchu, with Shang-Chi developed as Fu Manchu’s son.

The key conflict of Shang-Chi’s origin story is his decision to leave his father’s criminal empire, realizing Fu Manchu’s destructive influence and choosing to use his martial arts skills to do good instead. Trained in combat since childhood, he moves on to fight criminals, terrorists, and supervillains, sometimes teaming up with other Marvel heroes like the Heroes for Hire and the Avengers. In Shang-Chi and the Legend of the Ten Rings, there’s speculation that the Mandarin may replace Fu Manchu’s original role—possibly because the Mandarin is already established in the MCU, or possibly because Fu Manchu has a racist legacy in American pop culture.

The Ten Rings organization has been in the MCU from the start, introduced as a terrorist group responsible for kidnapping Tony Stark in Iron Man. They appeared in the background of a couple of other Marvel films and had a key role in Iron Man 3, but aside from Ben Kingsley’s Mandarin fake-out, we don’t actually know much about them. It looks like Shang-Chi will offer a more three-dimensional look at the organization, and we can’t imagine Tony Leung would sign up unless there was a meaty role on offer for the Mandarin.

Marvel hasn’t confirmed whether Shang-Chi and the Legend of the Ten Rings will be an origin story, or when it will take place in the Marvel timeline.

Shang-Chi and the Legend of the Ten Rings comes out on Feb. 12, 2021, following The Eternals in Marvel’s Phase 4 calendar.

Expect the trailer sometime in 2020.