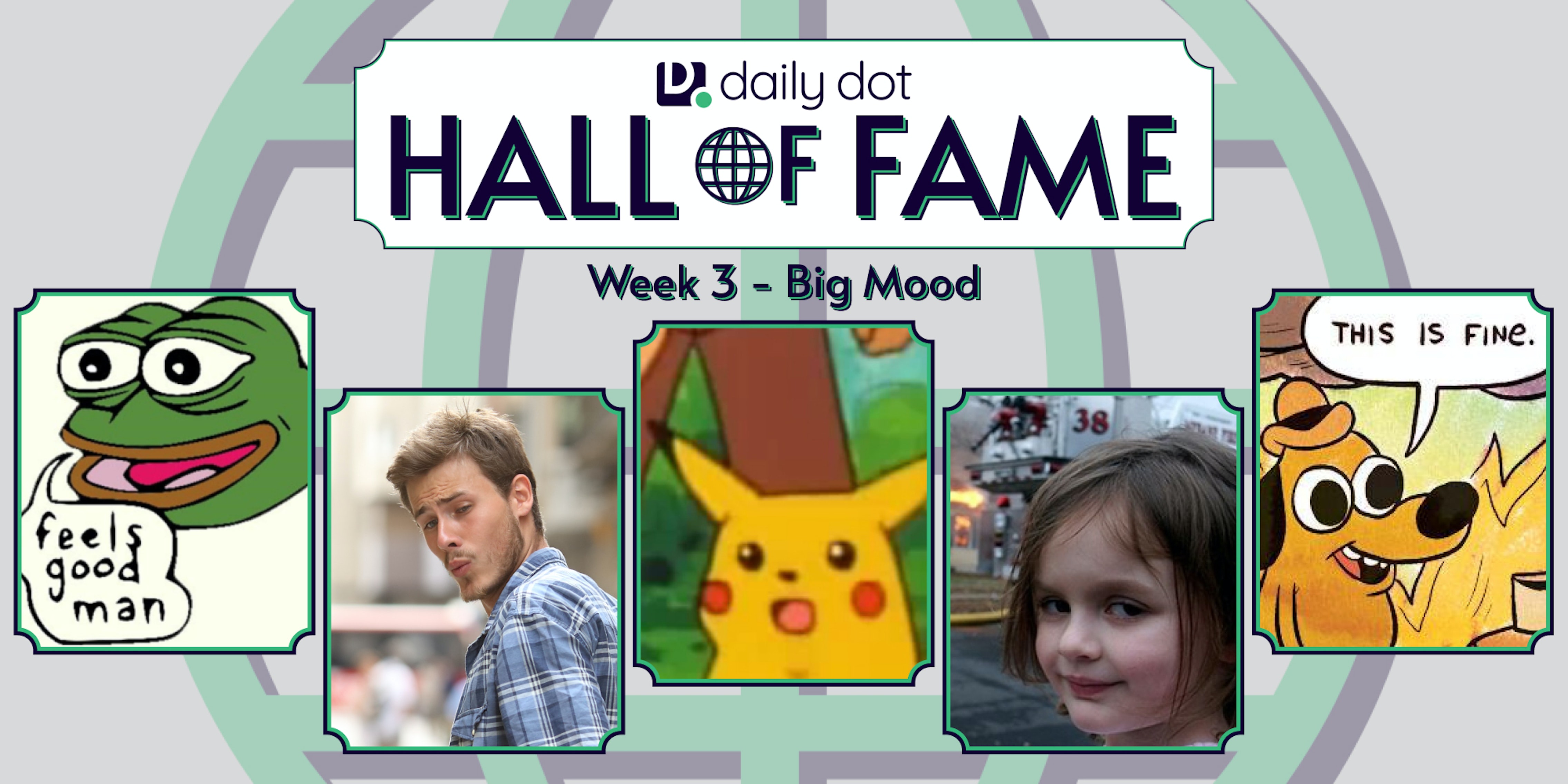 Who should be in the Daily Dot Hall of Fame? Sign up for the web_crawlr newsletter to vote!

In October, web_crawlr subscribers will vote on 5 categories—each made up of 5 nominees offered up by the editorial staff—and the 5 winners will become the inaugural Daily Dot Hall of Fame inductee class.

Today’s category is “Big Mood.” Check out more about the hall of fame here.

If you want to vote in the next round of the Daily Dot Hall of Fame, sign up for web_crawlr to get the best and worst of the internet in your inbox.

You know this one: There is a house fire in the background as a 4-year-old smirks at the camera. She chose villainy, apparently.

It’s a relatable feeling: Going full Joker amid chaos and… enjoying it. That feeling of walking into the grocery store, locking eyes with a senior citizen, and shopping maskless regardless.

As such, the photo has been omnipresent online since 2007. A bit of history: The girl’s dad entered this 2005 snapshot in a photography contest. Last year, Disaster Girl aka Zoe Roth (then a college senior with debt) sold the meme as an NFT with an eye on paying said debt and donating to charity.

This screengrab from the original Pokemon ‘90s anime features the iconic cartoon Pikachu, you guessed it, looking surprised. But there’s specificity here: Originating on Tumblr in 2018, the joke is that you are surprised at something which you should not be surprised about.

You do not pay attention in class and bomb the quiz. Surprised Pikachu.

You bet on the Washington Generals. They lose to the Harlem Globetrotters. Surprised Pikachu.

And how many screengrab-based reaction memes even became standalone slang like just the phrase “Surprised Pikachu”? As in, “I went on a date with a man who told me I didn’t ‘add value’ to his ‘goals’ and, Surprise Pikachu, it didn’t work out.”

Our former Associate Managing Editor Monica had a plush version of the “This Is Fine” dog in the office. It was a comforting reminder that nothing gold can stay.

Based on the comic by KC Green, the dog, calmly sitting on the kitchen table as the house around him is on fire, represents the boiling frog phenomenon of standing pat until it’s too late. The “big mood” meme is just a single panel of the comic strip. The dog later says “I’m okay with the events that are unfolding currently” before melting to death.

But the meme also came to represent acceptance as “this is fine” became a fatalist rallying cry of perseverance: Nothing can meaningfully change in your lifetime but you, personally, can be OK if you tune-out the bad stuff and make an effort to be a good person.

Can’t think of a more effective way to get by.

Can you separate the artist from his art? That’s the plea here.

Yes, Pepe the Frog—and infamous 4chan image that has been bouncing around the web since 2006—became co-opted by fascists and white nationalists, famously culminating when noted scumbag Richard Spencer was punched in the face while wearing a Pepe pin during the inauguration weekend of President Donald Trump.

But zoom out: At his most pure, Pepe is a big mood because of his classic catchphrase, “Feels good man.” Pepe is much like the lyrics to Taylor Swift’s “Red”: Forgetting him was like trying to know somebody you never met.

Creator Matt Furie was only wrong about the timeline when he told us in 2016 about Pepe’s right-wing heel-turn: “It’s just a phase, it’s not the first time Pepe has been reclaimed for evil, and no one will care about it come November. I predict that his sly, lovable, and charming status will be intact as early as next week.”

And as Furie also told us in 2015, “feels good man” was the point all along: “My Pepe philosophy is simple: ‘Feels good man.’ It is based on the meaning of the word Pepe: ‘To go Pepe.’ I find complete joy in physically, emotionally, and spiritually serving Pepe and his friends through comics. Each comic is sacred, and the compassion of my readers transcends any differences, the pain, and fear of ‘feeling good.’”

This one takes us from a complicated, politically charged meme in Pepe to perhaps one of the most simple, yet effective, memes of all time. As we wrote in 2017 about the infamous distracted boyfriend, wherein a boyfriend turns around to scope out an attractive woman as his current girlfriend notices and looks at him with understandable outrage:

“Guy staring at girl” has high potential due to its simplicity and ease of use; all you have to do to participate is label the characters.

Indeed. The Reddit-based meme is wildfire because you don’t need anything but a good setup: Me, Being Sober, A Bong Rip. Me, Critically Acclaimed New Music on Spotify, Follow the Leader by Korn. And so on.

To vote in next week’s round, sign up for the Daily Dot’s web_crawlr newsletter!