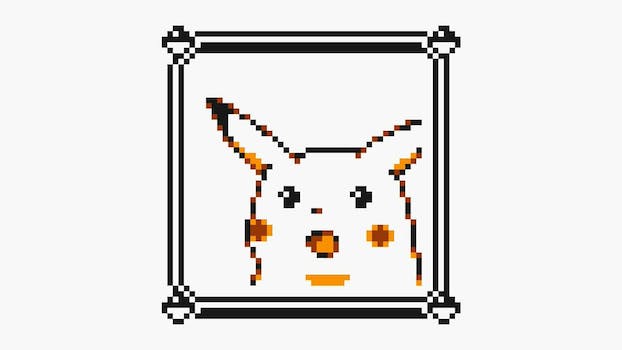 Surprised Pikachu looks even better as a pixelated meme

Pikachu, we choose (pixelated) you!

Surprised Pikachu, which features an out-of-focus screengrab of everyone’s favorite yellow electric mouse (or squirrel?), became a popular reaction meme on the internet last month. Everyone loves the meme—but have you seen the pixelated version?

Pixel artist and Twitter denizen @TAHK0 creates old-school renditions of Pikachu, and their version of the Surprised Pikachu meme is even cuter than the original. In one creation, @TAHK0 has taken the small pop-up window that would appear when checking in with Pikachu in Pokémon Yellow: Special Pikachu Edition and edited the Pokémon to look just like its anime counterpart, to fantastic effect.

me: I’ll save later

It’s even more perfect than the anime version because it goes amazingly well with memes about the original Pokémon games. Failing that, its aesthetic is basically to die for, isn’t it? So clean, so sharp, so minimal—it’s the exact opposite of the original image.

But the Surprised Pikachu meme isn’t the only thing @TAHK0 is capable of making. As it turns out, Surprised Pikachu began life as a terribly-drawn Pikachu in the background of the Pokémon anime series. That’s why it looks like such a mess in the original image. Just look how cool Pikachu looks when @TAHK0 works their magic, though:

me: I recreate zoomed-in pikas with outdated pixel art

employer: that applies to zero jobs anywhere ever

pikachu aim for its head pic.twitter.com/0eccPzBeVU

pixeling background pikas is becoming a hobby of mine pic.twitter.com/0WC9eKE5Qb

Unsurprisingly, the internet is absolutely loving it. It’s also shining a much-needed spotlight on the sometimes appallingly low quality of the Pokémon anime, which apparently just lets people draw Pikachu (and others) however they want to sometimes?

How the hell was that second one even allowed to be a frame of animation?

I love this pic so much

Someone has to give those messy Pika animations some respect, after all!

We’ve reached out to @TAHK0 for a comment, and we’ll update this article when we hear back.