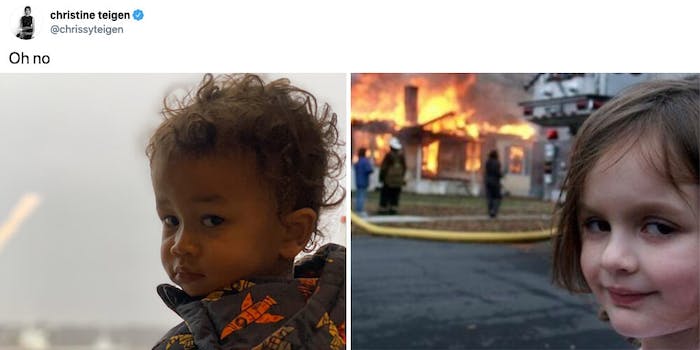 Leave it to Chrissy Teigen to spot a meme when she sees one. The model, television personality, and wife to the apparent Sexiest Man Alive has a well-earned reputation for being extremely online. So when she inadvertently snapped a photo of her one year-and-a-half old son Miles looking, shall we say, ominous, it reminded her of the infamous “Disaster Girl” meme.

Disaster Girl, of course, refers to the ubiquitous photo of a young girl standing in front of a burning building with an unsettling smile on her face. “Oh no,” Teigen captioned the side-by-side photos, simply enough. It’s unclear exactly what Miles was watching in the photo on the left, although he appears to be standing in front of an airport window. (Thankfully no Final Destination type of situation went down, as far as we know!)

Others, including Questlove, weighed in on the tweet comparison. One Twitter user even took it upon herself to Photoshop Miles over the original image of Disaster Girl in front of the burning house.

I mean, I’m sure it’s just a coincidence

As it turns out, the young girl in the original photo is now 19-year-old college student Zoe Roth. Teigen’s tweet caught the attention of Roth. “Hello Chrissy Teigen I am the child from that picture,” she tweeted back. “Love to see it.”

hello chrissy teigen i am the child from that picture. love to see it

Another user helpfully added a photo of a now-grown-up Roth standing in front of a bonfire. “Don’t worry, he’ll grow out of it! she grew up to… be…. oh no,” the tweet joked.

In a BBC piece from earlier this year, “Life beyond the meme: what happens after you go viral,” the Disaster Girl herself explained that her father had taken the photo in 2004 with a new camera he had been wanting to try out, and that they happened across the scene while walking near their North Carolina home.

Contrary to popular belief, the fire department had been doing a practice run.

“I remember the picture being taken. I thought it was an actual fire, so I was freaked out,” Roth told the BBC, adding that she didn’t know that it wasn’t a real fire until years later.

“I thought that people were in the house still, and I was worried for them—but not that worried, I guess, as I was still smiling,” she continued. “I can see now, that it probably later went viral because of how evil I look.”

Eventually, a social media marketing company bought the rights to the Disaster Girl photo, which helped pay for Roth’s college. So in other words, it seems as if she turned out just fine in the end.

Yet, Teigen would probably still rather her children emulate somewhat less frightening memes, when all is said and done.