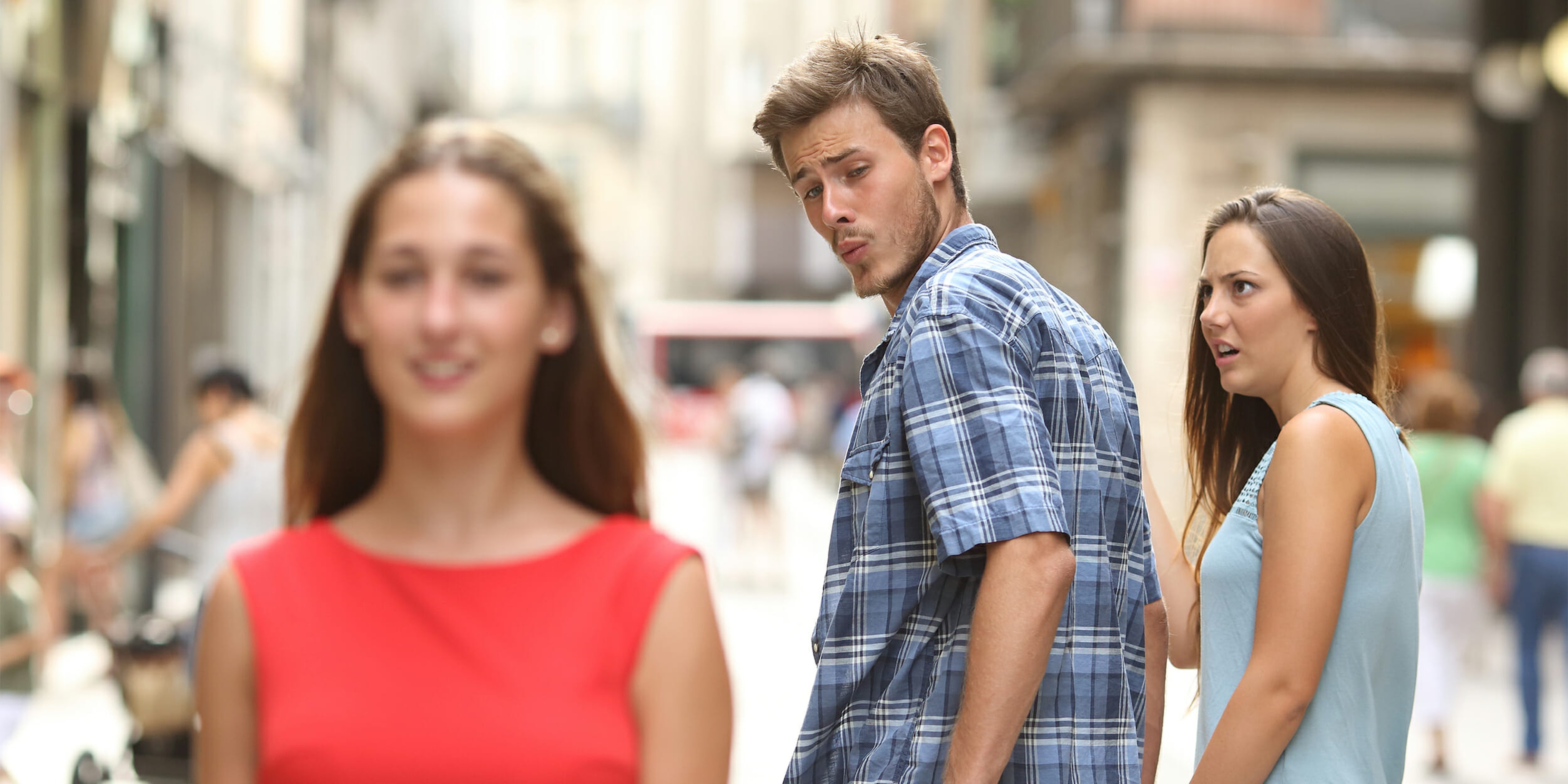 This hot new meme is kind of distracting.

In 2017, most memes are just funny, visual metaphors for simple statements. The bullet and skull meme says “X is destroying Y,” the floor is lava meme says “I dislike X,” and the length of recording meme says “people spend a lot more time talking about X than they do about Y.” The latest meme in this style is a stock photo of a guy turning to check out a passing woman, while his girlfriend looks appalled. It’s the distracted boyfriend meme.

The metaphor isn’t particularly complicated: the guy represents “you,” the girl walking by represents a distraction or a mistake or something better, and the girlfriend represents what you should be focusing on.

It’s especially funny because it describes literal staring, but most versions of the meme don’t do this. In this one, the poster knows he “should” choose life, but he openly yearns for death:

In this one, he can’t bring himself to play the video games he already owns when he sees that new games have gone on sale:

This entry, posted on Tuesday, shows a guy wishing it was “Wednesday, my dudes,” instead of focusing on the day it actually is. It also shows how the “guy staring at girl” format can be successfully combined with other memes. Here, the combination of memes is the entire joke.

As with many memes, the distracted boyfriend meme can be used in a meta fashion, as a commentary on memes themselves. This one is about how the poster is attracted to dumb, funny, low-effort memes, rather than complex and creative ones:

In this one, the poster prefers “actually funny memes” to this new “guy staring at girl” format.

The “guy staring at girl” meme is especially prominent on me_irl, one of Reddit’s most popular meme subreddits. It’s so popular, in fact, that posters there are starting to make fun of it. Instead of “quality content,” everyone’s busy playing with this hot new meme:

And here’s the inevitable meta entry that literally describes the photo. The joke is that there is no joke:

The rise of the meme has led to variations using different stock photos. Some include the same models as the original, while others just share the theme.

“Guy staring at girl” has high potential due to its simplicity and ease of use; all you have to do to participate is label the characters. It also hasn’t been fully exploited in terms of interactions with previous memes. The next step in its evolution could involve Spongebob photoshops, Drake, Shaquille O’Neal with glowing eyes, or similar, character-based variations.

These might never come, though, because it’s quick mainstream success has stereotyped it as a “normie” meme, which means the “dank” meme-makers who drive internet remix culture could have their heads turned by the next big thing before this one really has a chance to shine.