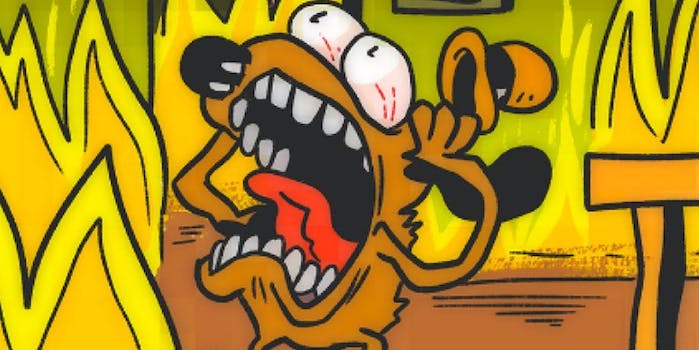 The dog finally snaps out of it.

You’ve almost certainly seen KC Green’s famous “This is fine” comic—it’s the one with the dog in the burning house, calmly ignoring the world around him as it falls completely apart. It’s become a meme that symbolizes our ability to either carry on when life is impossible or to sit idly by and never fix our problems.

Welp, things have officially gotten so bad that even the be-hatted dog of blissful denial realizes it’s all gone to shit. Hot, flaming shit. Green has updated the comic for The Nib, escalating it from Keep Calm and Carry On (even when you’re literally melting) to Now Panic and Freak Out: 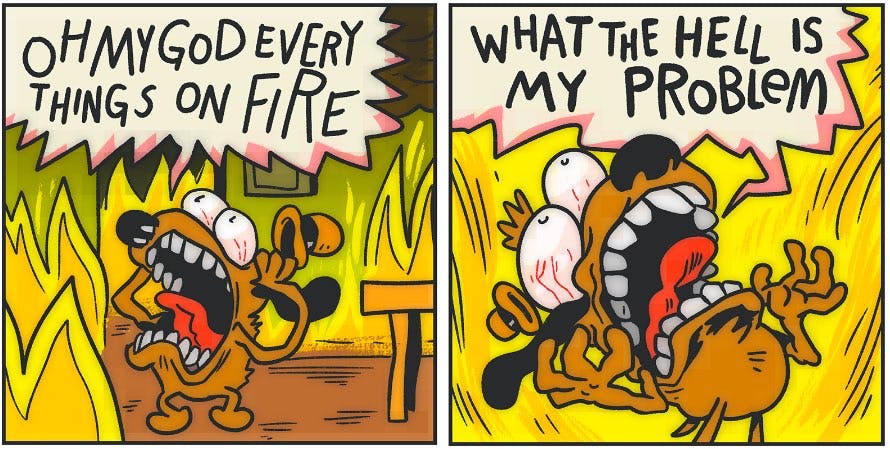 KC Green for The Nib

What was the catalyst for this shift from willful blindness to horrified realization? (Other than, as the comic mentions, “they shot a gorilla for godssake.” R.I.P. in peace, noble ape Harambe.)

“Nothing specific,” Green told the Daily Dot. “I mean, LOOK at 2016. The news is insane with weird and sad stories, the political climate with the upcoming election is BONKERS, and well it’s just a lot to take in and ‘ignore’ like the original comic implies.”

“There’s a breaking point to people,” he wrote, and “2016 is testing it. Anyway, there’s not much else to it. It was good timing and a longing sense of things wanting to be better for everyone.”

Much like “everything is terrible,” “wanting to be better for everyone” is something we can (almost) all agree on.

To achieve some betterness, Green is making the dog from the comic—the pre-melting version—into a plushie you can hug when you get the sense that circumstances are just totally crap. It went up on Kickstarter Wednesday morning and was funded almost immediately.

This, at least, is actually fine.