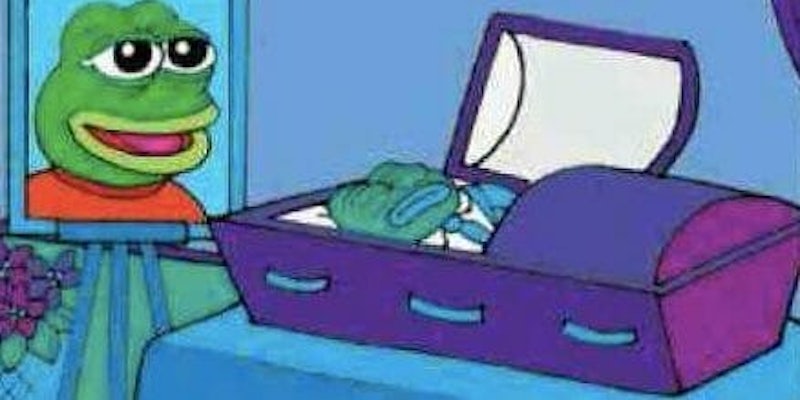 His creator killed him on Free Comic Book Day.

Pepe the Frog, the beloved webcomics character who became an everyman meme and was later co-opted by the online white supremacists of the alt-right, is dead. He was 12 years old.

Pepe’s creator, Matt Furie, who introduced the laid-back frog character in a 2005 strip from his webcomic Boys’ Club, laid the frog to rest in a new book released on May 6 (Free Comic Book Day). In the comic, Pepe was mainly known as a chilled-out fellow who peed with his pants pulled all the way down. His most iconic line was “feels good, man.”

But 4chan, the online hive of scum and villainy that’s also responsible for much of meme culture, took possession of Pepe early in his life. They drew all kinds of new expressions for him—starting with the obvious “feels bad man” variation—and made him a kind of everyfrog who could represent any emotion or circumstance. That was fine with Furie, who enjoyed the exposure the meme brought. That is, until 4chan’s growing white supremacist contingent (which had been nurtured for years by invaders from white power website Stormfront) adopted Pepe as a symbol for the Donald Trump movement.

Furie, unhappy with what had happened to his creation, tried to reclaim Pepe during the 2016 election with help from the Anti-Defamation League, but it was too late. Pepe is much more than a hate symbol, but it’s now impossible to deny that that’s one of his many aspects.

If Furie can’t take Pepe back, he can at least mourn the loss of the innocent character he created a decade ago. In his new one-page comic, we see Pepe’s funeral, with a smiling photo of the frog next to his casket. It’s how Pepe would want to be remembered: feeling good, man.

The page appeared in indie publisher Fantagraphics’ Free Comic Book Day entry, “World’s Greatest Cartoonists.” There may still be copies at your local comic shop, or you can get one on eBay from one of the many people who immediately put the free book up for sale.