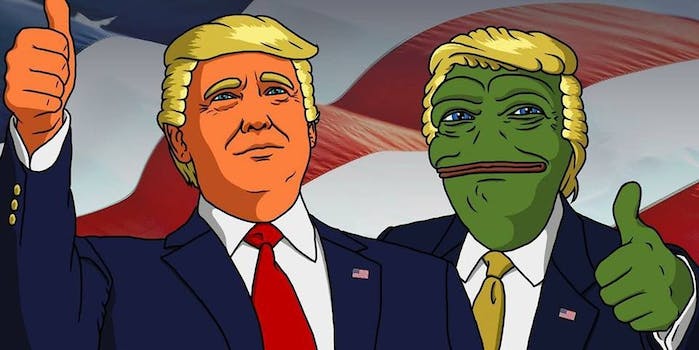 Pepe is bigger than politics.

Many people are saying that Pepe, a frog meme beloved far and wide, is now a Nazi and Trump supporter. In fact, Hillary Clinton‘s website was updated this morning with an explainer that claims Pepe is “a symbol associated with white supremacy.”

I’ve argued, meanwhile, that Pepe has been hijacked for the alt-right cause and does not represent their views.

But all of this back and forth might be considered moot when you consider the opinion of Matt Furie, who created Pepe in 2005 and put him in the first issue of his Boy’s Club comic the following year. The Daily Dot had previously spoken to Furie about Pepe’s legacy, but not since fringe conservatives had adopted the amphibian as their de facto internet mascot.

We caught up with Furie again to get his thoughts on the current Pepe climate.

How do you feel about Pepe’s use in so many pro-Trump memes, especially the more racist/xenophobic variations we’ve seen?

It’s just a phase, it’s not the first time Pepe has been reclaimed for evil, and no one will care about it come November. I predict that his sly, lovable, and charming status will be intact as early as next week.

Does this go against the spirit of Pepe as you understand it?

Pepe is a character in a comic book. In this book, Boy’s Club, he’s a cool, chill frog dude that likes to hang with his friends and drink pop and watch TV. He’s certainly not racist, as he hangs with a bird-dog, a wolf-like creature, a semi-mutt person, and a dude with round ears that is possibly a muskrat or maybe a bear. These dudes don’t even know what they are and it’s not important cause they are all different and they are all friends. The online Pepe is just a reflection of things that people think are funny on the internet.

THIS IS HOW OUR KIDS WILL LOOK IN SCHOOL WHEN WE BAN MUSLIMS. STOP THE INVASION pic.twitter.com/Q4SbKoJ9Sk

Obviously, there have been offensive Pepes before, but are these different?

It’s only different because it’s a news story, but there will be another news story tomorrow. No one cares about Bush vs. Gore anymore. Gore is a cool environmentalist now and Bush Jr. a cool druggie artist now. Everything changes. Racist, sexist, and homophobic people need to take mushrooms and go into the forest and look at their reflection in the pond water. We are all connected and we all need each other. One love.

Do you think the alt-right embracing Pepe changes him in some fundamental way or is it just another stage in Pepe’s long evolution? And where do you think Pepe can or should go from here?

Pepe is a shape-shifter that will soon save humanity and the whales and the frogs and the bees and bring people together in love and friendship and peace.