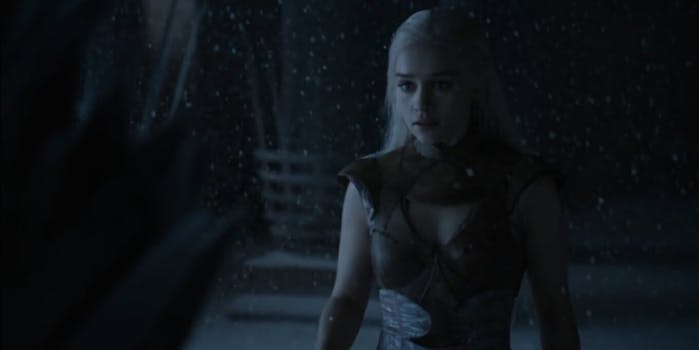 Fans are freaking out.

A Game of Thrones theory has recently been gaining steam online, and it has fans shook.

Fans of HBO’s award-winning series are digging for any and every tidbit out there in anticipation of the final season. One fan, a redditor who goes by u/marisaann26, thinks that they’ve figured out Daenerys Targaryen’s fate based on hints dropped in an old episode. It’s a discussion that’s gaining steam online.

The whole theory is based around the vision Dany had in the House of the Undying back in season 2. Dany walks into the throne room in a decimated King’s Landing, with snow falling all around. Just as she goes to touch the Iron Throne, the sound of her dragons drives her onward. She goes through the gate at the Wall and continues North. When she finds Khal Drogo and the son they never got to meet, she again forces herself onward. Most people assumed this scene had more to do with demonstrating Dany’s strength of will—not to mention her love for her dragons—rather than hinting toward Dany’s ultimate fate.

They believe that two parts of the vision came true in season 7. The final part, they say, hints toward Dany’s conclusion on Game of Thrones.

“You can see that parts of her vision have come true in season 7,” they wrote. “Dany going towards the throne, but is drawn beyond the wall = when, in S7, Dany was going to go attack Kings Landing and take the throne by force, but she was told Jon and company beyond The Wall need rescuing- goes beyond the wall.”

The connection is undeniably strong. The second part is when Dany hears her dragons crying out for her. “Dany hearing the dragon cries = S7 the dragons crying beyond the wall after Viserion was killed by the NK.”

It’s the final part of their theory that really has people talking, however. Marisaann26 thinks that season 8 will see Dany change sides, ultimately joining the Night King’s army of the dead. Let that sink in.

Marisaann26 notes in their theory that the warlock tells Dany “the mother is reunited with her babies and you’ll be with them through winter, summer, then winter again.” This, they theorize, can’t be true after Viserion’s death in season 7. If all the visions are fated to come true, therefore, Dany’s only choice would be to join her undead dragon among the wights.

“I believe that the Night King is after Dany to be either his new queen or to take over as queen (him wanting peace=death),” Marisaann26 wrote. “One way or another, both living dragons will die in battle. Distraught by losing her dragons, Dany with be persuaded to join the Night King to be reunited with her dragons = she gets her ICE THRONE.”

Could Dany become the Night Queen?

The theory is in part based on comments made by Emilia Clarke, who plays Daenerys, in recent interviews. “In an interview with Emilia Clarke (Dany), she talks about the final season and said ‘it fucked me up- knowing that is going to be a lasting flavor in someone’s mouth of what Daenerys is’ and that Dany is doing really weird stuff,” Marisaann26 wrote.

They also noted comments from Vladimir Furdik, who portrays the Night King. “Well, in an interview with the actor that plays the NK, he said that ‘we will learn WHO the Night King is after.'”

If Marisaann26’s theory is right, season 8 has some gut-wrenching scenes in store for us. It’s hard to say how likely the theory is, but Marisaann26 isn’t the first to speculate about it. Back in December 2017, YouTube channel Talking Thrones uploaded a video postulating almost the exact same thing.

Plus, this is Game of Thrones we’re talking about. Anything could happen.