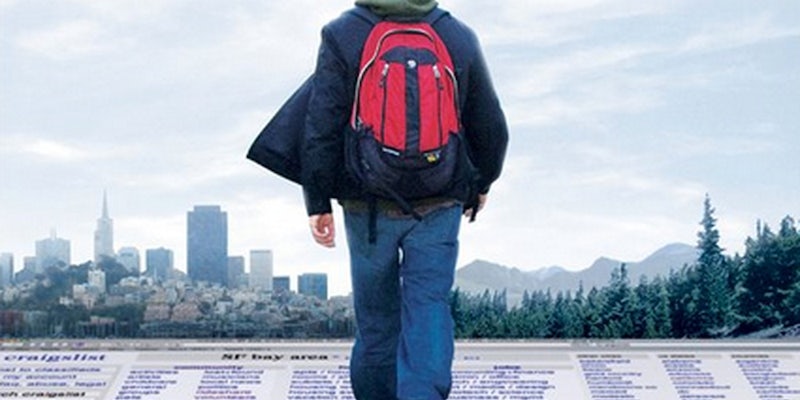 Connecting through classifieds: The saga of “Craigslist Joe”

Director Joe Garner chronicled his attempt to live entirely off of Craigslist posts for one month. What he discovered in doing so was a unified community of people.

Show of hands: How many people have ever used Craigslist to find something they need?

Now keep those hands up if you’ve ever taken a minute to actually get to know someone with whom you’ve made a Craigslist deal. Keep ’em there if you’ve ever done the two—finding what you need and getting to know the dealmaker—exclusively for every day for an entire month.

If your name’s not Joe Garner, and you still have your hand in the air, you’re lying.

Garner is the director and star of Craigslist Joe, a documentary—released today—that follows his daring attempt to live entirely off of the massive classified listings site.

“I’ve gone skydiving, but I wouldn’t say that I’m a thrill seeker,” Garner, 29, told the Daily Dot. “I don’t have to go out and do crazy stuff and interact with as many people as I can. It’s just that a lot of times I can get stuck into my routine, and I try to make a conscious effort to break out of that and mix it up.

“This was the biggest thing that I have done to try to satisfy that need.”

For 31 days in December 2008, Garner lived entirely off the Craigslist land. He started out in his hometown of Los Angeles with nothing but a laptop, cell phone, toothbrush, and the clothes on his back—and he ended up in San Francisco.

In between, Garner traveled to Portland, Ore.; Seattle, Wash.; Chicago, Ill.; New York City, N.Y..; New Orleans, La.; and San Francisco, Calif.— using nothing but the help of Craigslist’s infinitely robust network, one that Garner attests is far more of a community than the site’s low tech, no frills interface would have you believe.

“I was never an avid Craigslister before this,” Garner said. “I’d go there to find an apartment or look for an odd job here or there, but I wasn’t a devoted user.

“What I found was that there are people who are. The whole time, I felt this unified feeling of a much larger community out there. I didn’t have the feeling when I was going and interacting with these people that they were isolated, separate events that had no relation to each other.”

That community gets personified through the Craigslisters Garner meets throughout the month. There’s Travis Shivers in Los Angeles and Mohammad Al-Maly in Seattle—people who opened up their homes and offer Garner rides when he needed them.

These people are about more than just selling bookshelves and posting odd jobs for afternoon work. They’re proverbial shelters from the storm. They’re a community that’s set out to expose each other to differences and learn through immersion—something that Garner realized only a few short days into his journey.

“A theme emerged pretty quickly when I was up in Seattle with that woman Susan and then at Mohammed’s parents’s house,” Garner remembered. “That was kind of the first time that I realized this was much more than a story about my own survival. There’s a bigger thing going on here: a desire to connect. Even in the face of adversity, the resilience that a lot of people showed was really inspiring.”

Garner hasn’t maintained the same level of Craigslist immersion since he completed his month on the site, but he admits that he does use the massive site—which sees more than 60 million unique visits per month in the United States alone—differently than he once did.

“There are all sorts of other sections—the community meet ups, the events page,” he said. “There are rants and raves where people get going and talk about whatever’s bothering them.

“I’ve heard stories about how people have furnished their entire apartment on Craigslist, or gotten a job, or found a date. It’s not like you’re emailing a website that will spit out a response for you. There are individuals like myself out there, and there are sections that are geared towards interaction and meeting other people.”