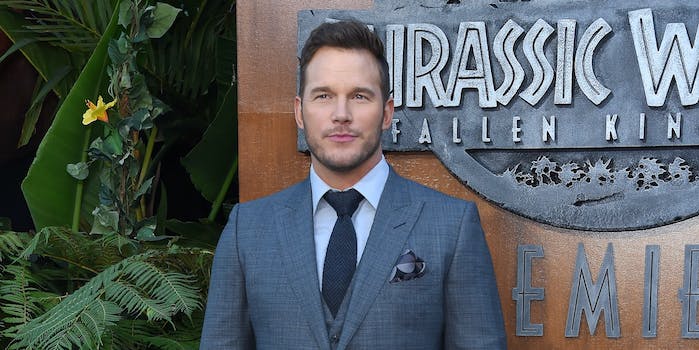 It's simply not true.

We’re nearing a week into the fallout from the latest round of Chris Pratt discourse, which started off as yet another rehashing of his status as “worst Chris” and his alleged political leanings. It’s now transformed into a wide-scale PR defense of Pratt’s character from many of his Marvel Cinematic Universe colleagues—and inevitable backlash as fans highlighted past transgressions and pointed out how those actors never came to the defense of female co-stars like Brie Larson.

But now, we’ve reached the point of the discourse when, inexplicably, someone makes a claim that celebrities being outwardly political is only a recent thing.

That take came from Vox’s Matt Yglesias, who posted his thoughts about the history of celebrity political activism in response to a BuzzFeed tweet that read, “Chris Pratt Might Be A Republican, But Should We Care?”

“I’m not sure young people know this but there was a time in the not so distant past when we simply had no idea what 99% of celebrities thought about anything — you were just flying blind deciding what shows and movies and music you enjoyed,” he tweeted.

It’s the kind of assertion that’s practically engineered in a lab to get ratioed for its shortsightedness and ignorance of, well, history. And to be sure, critics offered up plenty of examples of celebrities who were political or voiced their political views long before the 2016 or 2020 elections.

Yglesias’ response was, more or less, a snarky comment aimed at the people pointing out that celebrities have had views on politics.

It’s easy to dig through the Golden Age of Hollywood or point to more recent examples of celebrities speaking openly about their own politics; many have already done that. You can point to decades of Jane Fonda’s political activism and how the FBI targeted her for it. You can reference Marlon Brando’s refusal to accept his Oscar for The Godfather because of the film industry’s treatment and depiction of Native Americans (and him sending Sacheen Littlefeather to relay that refusal). You can cite the music of Johnny Cash, Marvin Gaye, Bob Dylan, and the world’s most misunderstood Bruce Springsteen song. Or the fact that the Rat Pack endorsed John F. Kennedy during his presidential run in 1960. Or how the FBI didn’t just go after civil rights icons and those pushing for equality but those who supported it like Jean Seberg, and how Americans turned their backs on Muhammad Ali for refusing to serve in Vietnam.

Hell, we can even point out that we literally have had presidents who were famous for being celebrities—an actor and a reality TV show host, respectively—before taking up residence in the Oval Office; Kanye West is running a spoiler campaign this year. And then there was the time that Nazi sympathizer Charles Lindbergh (who was a celebrity in his own right as an aviator) ran against Franklin D. Roosevelt for president; Lindbergh’s imagined win and rise of fascism in America is the subject of the Phillip Roth book and recent HBO miniseries The Plot Against America.

But even if Yglesias or the people who would prefer to cling to the idea that Hollywood, and celebrities themselves, are apolitical, it’s also ignoring that celebrity itself has long been political. Birth of a Nation, the first blockbuster, inspired the return of the Ku Klux Klan in America; Woodrow Wilson, a noted racist, touted the film’s merits. Charlie Chaplin mocked Adolf Hitler in The Dictator before the U.S. even entered World War II.

Hollywood and the federal government teamed up to produce and release a steady flow of propaganda films during WWII. In the years after the war, the House Un-American Activities Committee (HUAC) investigated Hollywood as a potential hotbed of Communism, and Hollywood distanced themselves from some of those WWII movies that were sympathetic toward the Soviet Union (which was an ally at the time).

The Blacklist season of You Must Remember This, Karina Longworth’s podcast that explores Hollywood history, extensively delves into how HUAC’s witchhunt against Hollywood affected the industry. It largely ruined the careers of the Hollywood Ten, who refused to name names to the committee and went to prison for it before being blacklisted from working under their own names. Some named names (and were later ostracized by their peers for it) or discouraged to openly support the Hollywood Ten, and others were prevented from returning to the U.S. for years, such as Charlie Chaplin. One of Arthur Miller’s most famous plays, The Crucible, depicted a clear political allegory for McCarthyism and the Red Scare in the form of the Salem Witch Trials.

Even in more recent years, the Chicks were blacklisted on country music stations because they were critical about George W. Bush; as the Taylor Swift documentary, Miss Americana, revealed earlier this year, the Chicks blacklisting would serve as an example to Swift of what could happen if she alienated conservative fans by being politically active. Earlier this summer, John Boyega worried that speaking out in support of Black Lives Matter could end his career.

And to this day, the choices that executives and studios make about what kinds of stories they tell, which actors they cast and who gets to tell those stories, and which audiences to serve—along with the disproven idea that women and BIPOC don’t go to see movies that still persists even though multiple studies have shown that movies with inclusive casts make more money (and doing the opposite could lose them money)—is still prevalent in Hollywood.

But still, the idea that Hollywood is apolitical and celebrities have no views about politics persists. Every so often, a pushback happens when politics come up or when someone tries to revise history to make it seem like widespread celebrity political activism is only a recent thing. It’s not only inaccurate, but it also ignores that being apolitical, even if it’s only to not alienate audiences, is still inherently a political choice (and a privileged one at that). It’s also an erasure of the celebrities who used their platforms to support the civil rights movement, pro-LGBTQ+ causes, and other platforms over several decades.

Just like the never-ending debates that occur whenever someone points out that Star Wars and Star Trek have always been political, just because you never noticed it until now doesn’t mean it wasn’t always there.