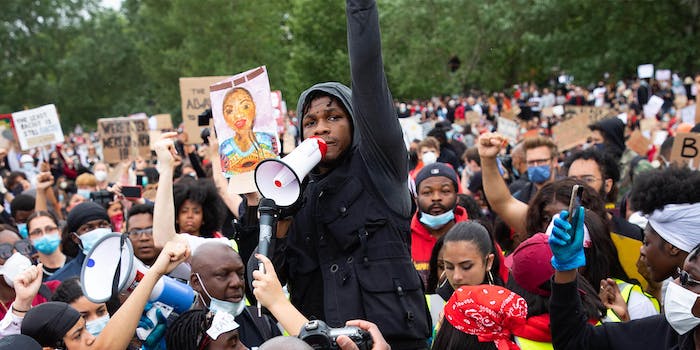 Actor John Boyega, who’s been vocal about the Black Lives Matter movement and protests in the wake of George Floyd’s death on social media, joined thousands of people protesting systemic racism and police brutality in London’s Hyde Park on Wednesday.

During the protest, which was organized by Black Lives Matter’s London chapters, Boyega used a megaphone to speak to the crowd while a microphone amplified his voice even further, citing the names of George Floyd, Trayvon Martin, Sandra Bland, and many others throughout the speech.

Boyega, who’s spent days posting his support for protesting the treatment of Black people, became emotional as he described to the crowd what it felt like to be reminded that he was Black and how differently he’s been treated because of it. “I need you to understand how painful this shit is,” he told the crowd.

He addressed that while he didn’t know if protesting and speaking out against police brutality and racism would mean the end of his career as an actor, he knew it was important to do anyway.

‘I’m speaking to you from my heart,” he said. “Look, I don’t know if I’m going to have a career after this, but fuck that.”

Boyega told the crowd how necessary it was for them to assure that the protests were organized and peaceful. And in a message targeted specifically for Black men, Boyega, in tears, also voiced how important it was for them to support Black women throughout this movement.

In a video posted on Instagram Live as he marched throughout London, Boyega told Black Americans that “You are not alone, you will never be alone,” calling it a life-long commitment.

A full version of Boyega’s speech can found below.