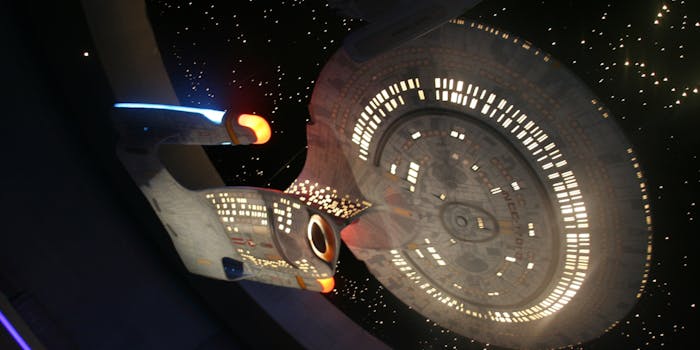 William Shatner blocked us on Twitter because we think 'Star Trek' is political. Here's why we're right.

My phone buzzed and I looked down to see a text from my friend Myra. “You’re the only person I know who can successfully pick fights with celebrities,” she said. I immediately ran to Twitter.

Picking fights with celebrities isn’t something I do routinely, but this morning, I had this tiny interaction with William Shatner:

Star Trek wasn't political. I'm not political; I can't even vote in the US. So to put a geocentric label on interstellar characters is silly

I don't think I have ever boggled as hard over any sentence in my life as this tweet https://t.co/23ga2oQfWn

"Star Trek isn't political except for [every episode of Star Trek]"

My tweets got some traction from Star Trek fans as flummoxed as I was about why Shatner would say his iconic, groundbreaking, famously political show wasn’t political. I interacted with some of them, joking at one point about how I hoped his “ghostwriter” had been sacked.

But then Shatner saw my tweets and responded.

Obviously you do not know me and the person who should be "sacked" is yourself my dear. @dailydot https://t.co/SFL40oWefc

The Shat had hit the fan. My notifications were flooded with people attempting to argue with me that Star Trek isn’t political, while my friends and I freaked out because William Shatner was trying to get me fired. The hashtag #SackAjaRomano was briefly deployed. My fellow sci-fi loving colleague Eric Geller very kindly came to my defense, but Shatner was having none of it.

So she can insult and debase myself and my tweets as a "reporter" and you, as editor, just brush it aside? https://t.co/Xunj7Cf6k2

Eventually, I realized Shatner had blocked me, in addition to most of the rest of the Daily Dot staff. But why had he gotten so upset to begin with?

Star Trek‘s entire premise involves the diplomacy of sociopolitical colonization—the act of finding new worlds and hopefully bringing them into the cooperative intergalactic political organization known as the Federation.

Let’s break this down. Shatner’s initial tweet was in response to a media debate about Star Trek‘s political relevance due to Thursday’s interview of Republican political candidate Ted Cruz in the New York Times. Cruz stated that his favorite Star Trek captain was Kirk, and even ventured that Kirk was probably a Republican. He also described Kirk as “a passionate fighter for justice,” and noted, “The original Star Trek pressed for racial equality, which was one of its best characteristics, but it did so without sermonizing.”

Given the current political climate, Cruz’s claiming Kirk for his “side” left a bad taste in plenty of mouths, especially because classic Trek was famously progressive for its time. The Washington Post responded to the Times piece with a rundown of the many ways in which the Enterprise‘s most famous captain exhibited traits antithetical to those of the modern Republican party.

Perhaps, when Shatner tweeted that Star Trek isn’t political in response to this, he meant only that Star Trek isn’t partisan. This is a claim with which I would generally agree. But his statement raises an important question that has polarized my Twitter notifications all morning: Can a show whose primary concern is about the mechanisms of politics be seen as non-political?

Star Trek‘s entire premise involves the diplomacy of sociopolitical colonization—the act of finding new worlds and hopefully bringing them into the cooperative intergalactic political organization known as the Federation. Kirk and his crew routinely had to muddle through interactions with new worlds, cultures, and individuals who had strikingly different political systems.

Time and again, these political systems had a direct effect on Kirk and his crew.

I could go on, but you get the picture.

All of these plots, as well as the constant exploration of how governments work in these new worlds, are obviously political. In addition to the show’s textual emphasis on politics, its production, casting, and editorial decisions were constantly imbued with politically charged messages. Shatner and Nichelle Nichols famously had the first interracial kiss on television in 1968’s “Plato’s Stepchildren,” coming at the pinnacle of the civil rights movement and coming only a year after the Supreme Court had legalized interracial marriage. When Nichols wanted to leave the show, it was Martin Luther King himself who famously convinced her to stay, due to her character’s enormous cultural influence as one of the first non-stereotyped roles for black women on television. The presence of Russian Ensign Pavel Chekov on deck of the Enterprise was a controversial pro-globalizing statement during the Cold War. The character of Khan remains one of Earth’s most famous—and most sympathetic—fictional terrorists.

In addition to the show’s textual emphasis on politics, its production, casting, and editorial decisions were constantly imbued with politically charged messages.

Even the Federation itself is a deliberate extension of the United Nations. In the Star Trek universe, the U.N. as an organization was canonically replaced with a governing body called the United Earth after the discovery of extraterrestrial life.

And this doesn’t even touch the many ways in which subsequent Star Trek iterations beyond the original series have canvassed political plots and themes, from Deep Space Nine‘s overarching Israeli-Palestine allegory to Star Trek IV‘s blatant environmentalism.

To say that Star Trek “wasn’t political” is factually incorrect. Many people would argue that its politics adhere to a philosophy of humanism, and I would tend to agree; but to say that the series is apolitical fundamentally misrepresents and misspeaks everything that Star Trek is about.

It’s exasperating that William Shatner, of all people, would disagree and then publicly chasten me for pointing out the inaccuracy of his statements. Many of his 2 million followers are currently flooding my inbox and demanding that I lose my job; but when this is over, Star Trek will still be an inherently, deeply political series, and fundamentally important to pop culture especially because it is so deeply political.

I love Star Trek, specifically classic Trek. Apart from the argument over whether Star Trek is political, speaking critically about a thing or a person you admire does not make you a bad fan; in fact, it makes you the opposite. It means you are holding the people and the shows you love accountable for themselves—even if that means pointing out when they misspeak.

If you’re reading this, Mr. Shatner, I hope you know that I have nothing but love and respect for you and the iconic roles you have played over the years, Captain Kirk above all. I hope one day we can laugh about this, and perhaps even boldly go where no Twitter debate has ever gone before: toward reconciliation and the understanding that the most critical and irreverent fans are the fans who love you the most.

Photo via sneezypb/Flickr (CC BY SA 2.0)