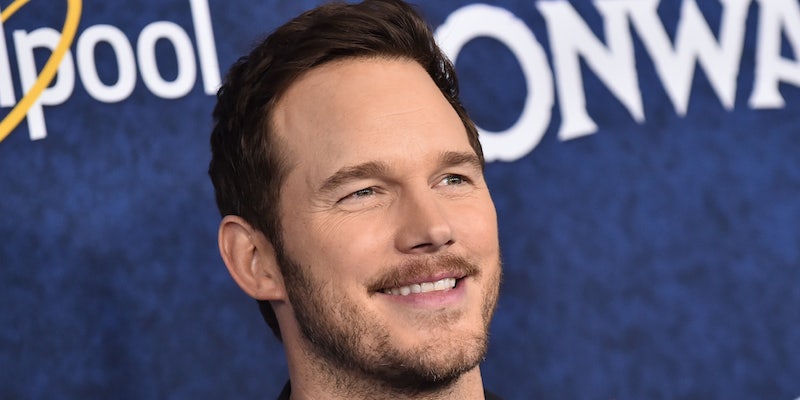 'Ma’am, he wasn’t savaged by killer bees. He lost a web poll.'

As several actors within the Marvel Cinematic Universe jump to defend Chris Pratt from online criticism, fans want to know: Where were they when their non-white, non-male co-stars received far worse harassment?

In case you missed it: Pratt came under fire this week for declining to take part in an Avengers–themed fundraiser for Democratic vice presidential nominee and Sen. Kamala Harris (D-Calif). Social media users reacted negatively to Pratt’s absence, with many blaming his lack of activism on his Christian faith. (Pratt is a member of the Hillsong church, which Ellen Page called “infamously anti-LGBTQ” in 2019.)

Over the weekend, The Alienist writer Amy Berg also created a Twitter poll ranking Hollywood’s four famous Chrises—Hemsworth, Pratt, Pine, and Evans—and said one had to go. Pratt won (or lost, depending on how you look at it) in a landslide.

Several of Pratt’s MCU co-stars jumped to his defense amid the online criticism, defending his decision and noting that he rarely engages in politics. Robert Downey Jr. called Pratt a “real Christian” who never demonstrates anything but “positivity and gratitude.” Mark Ruffalo defended Pratt’s apolitical tendencies and urged critics to “keep our eyes on the prize.” Josh Gad and James Gunn both praised Pratt’s personality, and Zoe Saldana noted that his friends and family know “your heart and your worth.”

Standing by a colleague and friend is typically nothing to sneer at, but social media users couldn’t help but notice a discrepancy between the actors’ responses to Pratt’s criticism and the harassment their other co-stars previously faced.

While promoting Captain Marvel in early 2019, Brie Larson advocated for greater diversity in the film industry, a topic she has been vocal about for years. People online tore into Larson for her advocacy, spewing hate on her social media profiles for months. Captain Marvel itself also drew the ire of sexist trolls who were outraged by a film that dared to orient itself around a powerful, non-sexualized woman.

Anthony Mackie, who portrayed Falcon in numerous MCU films and is slated to don the Captain America mantle as Steve Rogers’ successor, has also been on the receiving end of harassment. As one of Marvel’s few Black actors and a vocal critic of the company’s racist hiring practices, Mackie has faced criticism from racist fans who disliked Marvel’s decision to elevate his role in the MCU.

Tessa Thompson, another Marvel actor of color, has likewise received waves of hate. In April, the Thor: Ragnarok actress faced backlash from Marvel fans when her past comments about diversity in the workplace resurfaced.

As the Pratt drama continues to unfurl online, fans want to know: Where were the MCU actors when Larson, Mackie, and Thompson were being inundated with racist and sexist messages? Where were their statements noting Thompson’s charming personality, Larson’s gumption, and Mackie’s perseverance? Why did these coworkers not deserve the same solidarity shown to Pratt?

“Where was this energy when Brie Larson was massively harassed for months just for advocating for diversity in the industry?” Twitter user @itsjustanx asked. “And they all knew about it. Suddenly Chris Pratt gets some criticism and they all come to his defense?? The bar is hell.”

Many other Twitter users noted the hypocrisy of primarily white actors and directors stepping up to shield their cis, white, male friend while not making a peep on behalf of their female and POC co-stars.

Saldana is the only clear exception to this, but her message to Pratt is receiving its own criticism for appearing tone-deaf and melodramatic.

Saldana’s tweet begins with a Tupac quote: “No matter how hard it gets, stick your chest out, keep your head up and handle it.” She continues: “You got this @prattprattpratt. Your family, friends, colleagues & everyone who’s ever crossed paths with you knows your heart and your worth!”

Fans dragged Saldana in her mentions for treating the backlash like a genuine tragedy.

“Ma’am, he wasn’t savaged by killer bees. He lost a web poll,” one person wrote.

“You guys act like Chris Pratt was beaten, shot unjustly, been told he can’t marry the person he loved, had his child taken from him or something,” another said.

Amid the Pratt backlash, other Twitter users reminded the world that there are still plenty of unproblematic Marvel actors to stan. @GTapprove tweeted photos of several of them, including Mackie, Thompson, Larson, the late Chadwick Boseman, Tom Holland, and Chris Evans.

Also included in @GTapprove’s tweet were Jeremy Renner and Scarlett Johansson, who have not escaped criticism in the past. Renner endorsed Downey Jr.’s defense of Pratt in an Instagram comment, while Johansson has repeatedly been criticized for her staunch defense of alleged sex offender Woody Allen and her initial casting as a transgender crime kingpin in the film Rub and Tug.

WATCH: The Best Order to Watch the MCU