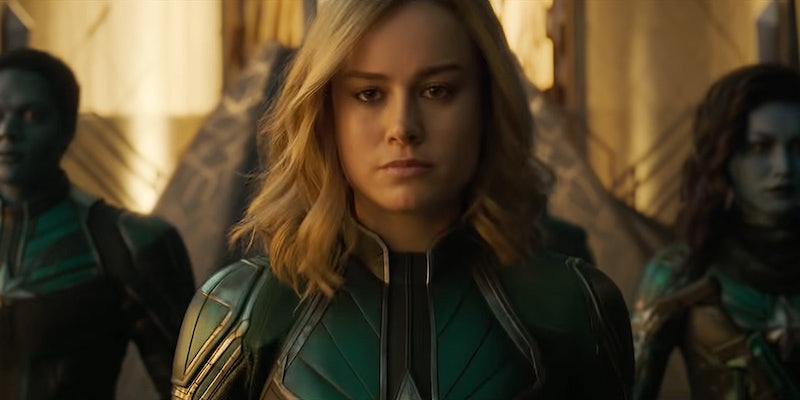 The speculation began thanks to an awkward viral interview clip from D23.

Brie Larson‘s tenure as Captain Marvel has been dogged by backlash, most of it transparently motivated by misogyny. So after three years in the role and no sign of the harassment abating, it would make sense for her to have mixed feelings about the MCU.

This issue is up for discussion in Marvel fandom once again, thanks to a brief interview with Larson at last weekend’s D23 expo. She was there to promote her Disney+ docuseries Growing Up and the Captain Marvel sequel The Marvels, and this 11-second clip comes from an impromptu interview with Variety. Asked how long she’ll play Captain Marvel, Larson shrugs abruptly and says, “I don’t know, does anyone want me to do it again?” Shrugging again, she says, “I don’t know, I really don’t have the answer to that.”

On paper, Larson’s response is totally typical for a Marvel star, avoiding any hint of spoilers for potential upcoming projects. However, the clip was a Rorschach test for people’s opinions on Brie Larson herself.

There’s a slightly stilted edge to her demeanor here, prompting fans to wonder if she’s less than enthusiastic about her future as Captain Marvel. Meanwhile, some of her detractors took this as further evidence that she’s not “likeable”—a subjective criticism frequently aimed at women in the public eye.

(It’s worth remembering here that this entire discourse focuses on one 11-second clip. Larson seemed more relaxed in other footage from D23, giving sincere responses to questions about The Marvels and generally promoting the MCU. She also posted a photo shoot with her female co-stars, captioned “trolls combust.”)

This interview quickly became fodder for Brie Larson’s haters on YouTube—the platform of choice for a lot of anti-fandom campaigns against women and people of color in SF/F media. Racking up hundreds of thousands of views, this 11-second clip inspired videos with titles like “Brie Larson ADMITS Everyone HATES Her As Captain Marvel At D23!” and “Brie Larson Interview MELTDOWN – Claims NOBODY Wants Her as Captain Marvel“

Over on Twitter though, Larson’s fans struck back by highlighting the way she has faced harassment for years, pledging their support for her continuing role in the MCU. “This really does break my heart man,” reads one popular response. “I love captain marvel and i love brie Larson. I hope she knows how many people love her.”

While a lot of people on both sides of this argument are taking Larson’s quote as evidence that she’s leaving the franchise, there’s no sign that’s actually the case.

Following her lead role in The Marvels next year, she’s expected to be one of the top-billed heroes in Avengers: Kang Dynasty in 2025, marking a new era for the Avengers team. Two months ago, she celebrated the announcement that Destin Daniel Cretton will direct, posting a photo from when they worked together in his breakout film Short Term 12.

This really doesn’t seem like the behavior of someone who is planning to quit at any minute, even if Larson does have conflicted feelings about the fandom’s response to Captain Marvel.