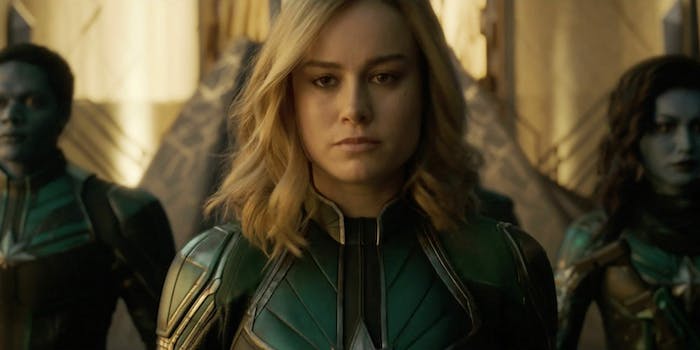 The film has yet to be released.

Rotten Tomatoes is getting rid of “Want To See” scores for upcoming movies, a decision that arrives hot on the heels of sexist idiots review-bombing Captain Marvel.

For those who aren’t familiar, Rotten Tomatoes offers two scores. The main one is an aggregated percentage of reviews from published critics, while the second, the “audience score” is decided by Rotten Tomatoes users. Until today, unreleased movies also had a version of the audience score, measuring audience anticipation for a film. But in a blog post published on Feb. 25, the site announced it was removing the “Want To See” score entirely:

Thanks to “an uptick in non-constructive input, sometimes bordering on trolling,” it’s also disabling comments on unreleased movies.

Over the past couple of weeks, people spammed Captain Marvel with negative comments to the point where it looked like the least popular Marvel movie to date. Instead of judging the movie on its merits, these comments were motivated by the fact that Captain Marvel is a woman (disgraceful!) and actress Brie Larson wants a more diverse pool of journalists to cover the movie (terrifying!).

Captain Marvel tickets are actually selling like hotcakes, making it a more popular film than Aquaman, Wonder Woman, and most of the Marvel franchise. So it’s safe to say that outside the world of Rotten Tomatoes trolls, people do, in fact, want to see it.