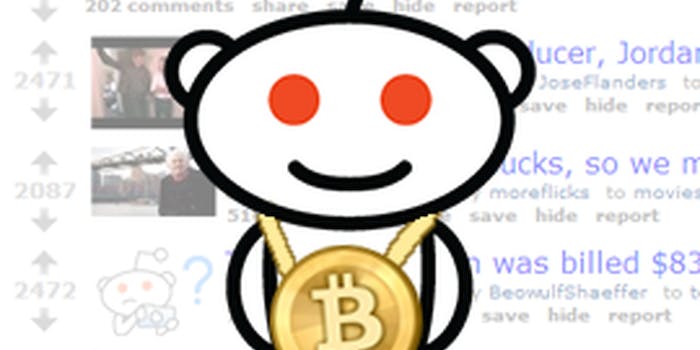 Who says Reddit karma isn't worth anything? Now there's a bot that lets Redditors tip each other in Bitcoins.

If being able to buy pizza, electronics, and blogging features using Bitcoins wasn’t enough to convince you that the digital currency had finally hit its stride, Reddit’s Bitcointip bot may be enough to win you over.

The bot allows reddit users to tip others for quality content using a comment or personal message. The bot was created by reddittor NerdfighterSean and is supported by more than 120 subreddits—including larger ones like r/starcraft, r/conspiracy, and r/MaleFashionAdvice.

NerdfighterSean was inspired to create the bot as answer to Reddit’s karma mechanism, a way of rewarding or punishing people for posts and comments. Because a redditor can upvote a comment or post only once per account, dedicated users, like NerdfighterSean, have yearned for a way to better recognize Reddit’s best content.

“It’s easy to leave a tip at a restaurant or buy your buddy a Coke, why can’t it be as easy online?” NerdfighterSean told the Daily Dot. “It frustrated me that all the online payment solutions charged fees that were too high, had too long of a delay, or had some other barrier to entry. When I found Bitcoin and realized that it was an open source solution to all of those problems, I started thinking about how to bring microtransactions to my favorite website Reddit.”

It took months for NerdfighterSean to build the Bitcointip bot before launching it last fall. Although the bot is in still in beta, the general process for giving a tip is pretty much nailed down.

To use the bot, redditors must create an account by messaging user Bitcointip, which is actually just the bot controlled by NerdfighterSean’s code. After your account is setup, you can load Bitcoins into it and dole them out as tips by using a Reddit user’s profile name. If the redditor you are tipping does not have a Bitcointip account, one will be created for them. If the user doesn’t accept the tip within 21 days, the transaction will be reversed and you’ll get your bitcoins back.

Your name, credit card number, banking information, date of birth, social security number, or email address are not required to use the Bitcointip bot. Each transaction currently costs users .0005 Bitcoins (which, according to current conversion rates, is about $.02).

To date, more than $1,000 worth of Bitcoins have been tipped using NerdfighterSean’s bot. That translates into 1,542 transactions, with the average tip being $.65.

“The minimum tip is 10 cents USD, but there’s not a maximum,” NerdfighterSean added. “If a joke makes you laugh, a story moved you, or the answer to a question taught you something, you could tip the author a little bit to show appreciation.”

Pseudonymous developer “Satoshi Nakamoto” launched Bitcoin in January 2009. Since then, the currency has been released in blocks by to a self-replicating computer program that regulates the worldwide Bitcoin supply. The currency has long been used to hide illegal activities like drug dealing,  but has recently grown in legitimacy. On Feb. 22 the currency surpassed an exchange rate of $30 per Bitcoin for the second time in history. It is currently trading at about $47 per coin.

On Wednesday, the Bitcointip bot hit a milestone after one random Reddit user tipped former New Mexico Gov. Gary Johnson .1 Bitcoin (which is currently valued at $4.72) for a comment he made during his AMA about how he plans on learning more about Bitcoins.

“I am so amazed, I can’t move further down in the AMA,” wellyesofcourse commented. “That’s how amazed I am at this.”

Other high profile redditors who have been tipped include Bill Gates and and Rick Falkvinge, founder of the Swedish Pirate Party. NerdfighterSean hopes such publicity helps more and more people embrace the digital currency.

“This goes to show that you don’t have to be a Bitcoin nerd to start receiving Bitcoins,” he said. “I think part of it is that Bitcoin is becoming easier to use. It takes time to develop software that interacts with the Bitcoin network, and we’re starting to see some of those solutions coming out.”

For more information on how the Bitcointip bot works, check out this infographic.