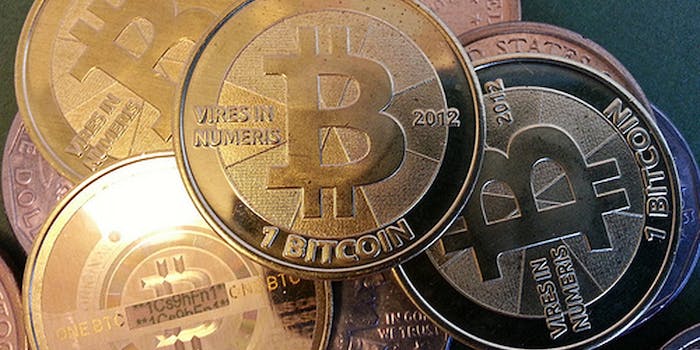 How to get and spend Bitcoin, the booming digital currency

Heard about Bitcoin, but still not sure what it is, how to buy it, or why you should care? Here are the basics.

It’s untraceable, unregulated, and can now be used to order a Domino’s Pizza.

Once only whispered about and exchanged in the dark corners of the Internet, Bitcoin has been touted as a boon to Internet anonymity, the salvation of online gambling in the U.S., and—having recently ballooned in value to $30 per Bitcoin—a solid investment.

It has also been decried as an enabler of the illegal drug trade, a funding mechanism for terrorists, and an unreliable, hacking-prone place to keep your money.

But what is Bitcoin, and how can you get your virtual hands on some of it? More importantly, why would you want to?

Bitcoin is an online currency. That’s not to suggest that it’s a kind of IOU bridging the Internet gap between sender and receiver. Rather, Bitcoin is a self-contained currency system.

It is an open-source, digitally primary currency without a central bank or other regulatory or issuing authority. Strictly peer-to-peer, it is generated by a software of the same name, and according to the main site for the currency, “managing transactions and issuing money are carried out collectively by the network.”

“Bitcoin,” according to the site, “is one of the first implementations of a concept called crypto-currency, which was first described in 1998 by Wei Dai on the cypherpunks mailing list. Building upon the notion that money is any object, or any sort of record, accepted as payment for goods and services and repayment of debts in a given country or socio-economic context, Bitcoin is designed around the idea of using cryptography to control the creation and transfer of money, rather than relying on central authorities.”

Bitcoin was created in 2009 by a developer (or developers) using the pseudonym “Satoshi Nakamoto” and was first outlined on a cryptographic email list. Nakamoto divided each Bitcoin into 100 million “satoshis” and put a limit of 21 million Bitcoins on the currency, with more and more released into the economic ecosystem until about the year 2140. (This is done by a process called “Bitcoin mining.”)

Bitcoin was not the first digital currency. But its innovation, a functional “block chain” on double-spending, was key. That is, the Bitcoin network, operational now for about three and a half years, has a built-in feature that makes virtual currency act like a physical object. With the block chain, you can’t just copy the Bitcoin and have two Bitcoins.

A currency “ledger” and controlled currency release are distributed across the peer-to-peer network and keep the currency from degrading. In part, this artificial control maintains the currency’s value.

Bitcoin relies on no central institution, like a bank, and has what is true nonreversibility—with no mediating institution to reverse a transaction, what is paid stays paid. Any fees are small and issued by Bitcoin exchanges, the largest of which is Mt. Gox.

Several companies have also begun issuing physical coins and bills based on the Bitcoin currency, but most of the transactions are conducted through computers.

How to use it (and what you can use it for)

The first step you have to take to use Bitcoins is to buy some.

Mt. Gox is the biggest Bitcoin exchange (but not the only one). You can start there. You sign up for an account and, as the copy on the page says, “[t]he price you buy or sell bitcoins for is up to you. If there is no one that will currently accept your offer then your offer will be saved and the trade will happen once someone comes along and accepts your offer.”

At last glance, Mt. Gox listed the current average exchange rate as $30.85899 for one Bitcoin. (For six months after its launch, Wired notes, it never rose above $0.14. It is currently experiencing a second bubble.) That gives the current available Bitcoin currency a worth of over $275 million.

Once signed up, you are equipped with a Mt. Gox user number, and your purchases and sales are attached to that number.

To download your Bitcoins, you will probably want to first download a Bitcoin client, which acts as a kind of electronic wallet. Wallets are protected with passwords and hold and manage Bitcoins’ encryptions. You can host them on your computer or use a cloud-based service. The computer-hosted version takes longer to validate a transaction, but it may arguably be more secure.

Now that you’ve got your Bitcoins, how do you spend them? And where?

The how is fairly simple. You use your electronic wallet, the Bitcoin client mentioned above, to send payments, as well as to accept the currency. An electronic wallet will take your payment instructions and move the Bitcoins (they’re nothing more than a series of numbers), sending them down the transom to the recipient, who takes them into his or her wallet.

Because clients or wallets are created by others, the chance of getting bilked is there. Like any other financial transaction, it is important to use a client with a good reputation both for ethical action and for security.

As for the where, the Bitcoin economy is still pretty tautological, if this list is any indication. You can buy lots and lots of Bitcoin stuff. You can gamble for more Bitcoins, you can get “Bitcoin promotional goods,” and there are a number of services, like “Bitbrew,” where you can buy coffee or food. If you want to engage in a kind of shadow economy based on Bitcoins, then, it’s there in living color. 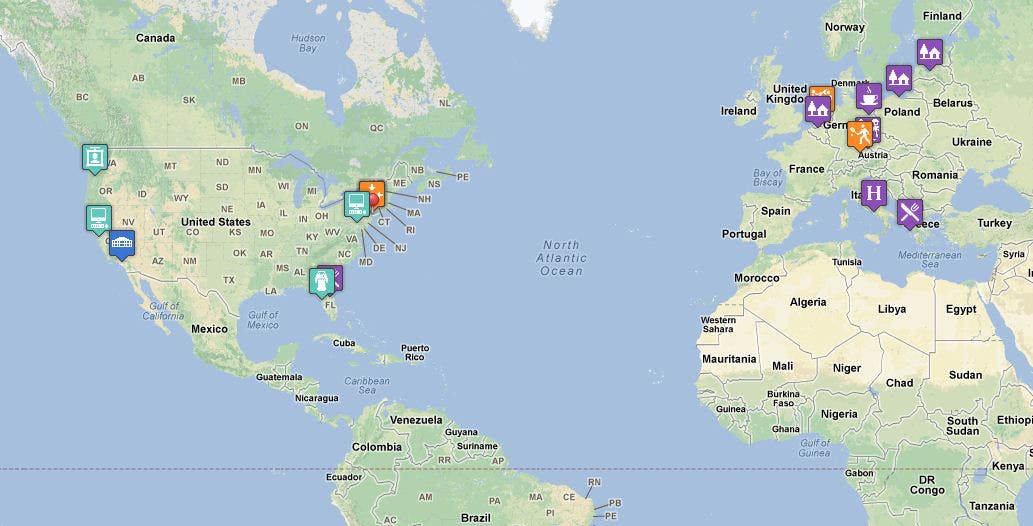 Most towns above a certain size have some business or other, maybe a scattering of them, that will accept the currency. But it is still rare and there does not seem to be a clearinghouse online that lists local businesses that accept them, except for Bit Navigator’s map mashup. Searching for “New York City,” “local businesses,” and “Bitcoins” on a search engine might get you a few results. Replacing “New York City” with “Eugene” or “San Antonio” or “Burlington” will not.

Why you would—and possibly shouldn’t—use it

Bitcoin provides a way to skirt financial fees, which have become more extravagant even as banks have lurched from crisis to crisis (and then to record profits). Using a currency that does not have its reigns clutched and hauled on by the same bankers—whose primary job seems to many to consist of figuring out novel and confusing ways to bankrupt their clients—is obviously appealing.

But the privacy element seems to be the most compelling to many Bitcoin enthusiasts. You can anonymously pay for a multitude of goods and services without governments and corporate data miners looking over your shoulders. 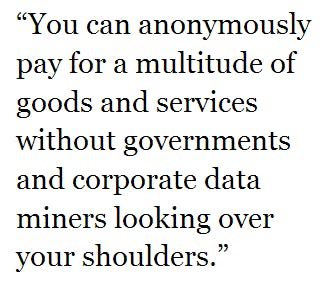 However, with that privacy come people whose interest in it derives from practical concerns attached to illegal activities, not from cypherpunk philosophy.

Bitcoin has become popular with drug dealers, including those attached to the Silk Road, a website that enables the sale of heroin and other drugs. Some law enforcement agencies fear the use of Bitcoin by criminals and even terrorists has the potential to dramatically increase.

Additionally, a number of hackers have stolen Bitcoins from people’s computers and more. One incident crashed the Mt. Gox exchange, albeit temporarily, and a Poland-based exchange succeeded in overwriting its entire store of Bitcoins, which are, remember, nothing more than strings of numbers, though admittedly very complex ones.

Because all exchanges are public, although anonymized, the information for every transaction is available and those who seek to follow that trail—intelligence agencies, for instance—could find the challenge of cracking it worthwhile. For this reason, some Bitcoin users spread their transactions across multiple wallets, making them theoretically harder to trace.

Even within the legitimate use of Bitcoins, some have taken mining to an extreme, attempting to use processing power to find and collect more of the currency than they were designed to find in the normal use of the system. And with any popular “revolutionary” or “game-changing” technology or other cultural product, making money breaks down barriers. Already, a bank for Bitcoins and a Bitcoin-based debit card are both in the works.

Bitcoins have experienced a bubble before, increasing in value by hundreds of percent and inspiring a kind of digital gold rush. By 2011 that bubble burst, but another has begun to build, more slowly this time, and it’s attracting attention again, both legitimate and unhealthy.

Indicted file-sharing magnate Kim Dotcom is accepting Bitcoin for his new site, Mega. You can tip strippers on social news site Reddit with them. But you can also support the Internet Archive by donating them—some of site’s staffers even asked to be paid partially in Bitcoin.

Anyone desiring to adopt Bitcoin due to its absolute privacy, complete disconnection from problematic financial systems and total safety should take care. Absolute, complete, and totally safe transactions may exist somewhere—but not on the Internet.