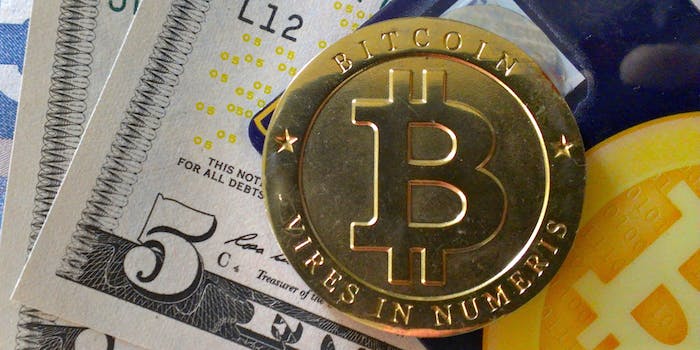 One Bitcoin is worth $30 for the first time since 2011. Will the digital currency just keep going up?

For the second time in Bitcoin’s history, the digital currency has surpassed an exchange rate of $30 per Bitcoin.

The exchange rate is a significant milestone for the four-year-old currency best known for enabling online drug deals, gambling, and other illicit activity.

Since August, the decentralized currency has received numerous stamps of legitimacy, including the first-ever Bitcoin bank and the ability to pay for pizza with Bitcoins. Not to mention, it is now accepted as a form of payment for advanced features on popular blogging platform WordPress.com.

Bitcoins were first launched by the pseudonymous developer “Satoshi Nakamoto” in January 2009. Since then, they have been released in blocks by to a self-replicating computer program that regulates the worldwide Bitcoin supply.

The Bitcoin exchange rate has risen steadily since last summer, when it hovered at about $4 per coin. It peaked at $35 in the summer of 2011, according to BlockChain. But that bubble quickly burst, and the value of a Bitcoin plummeted to $2.51.

“It is hard to say for sure why Bitcoin crashed the way it did,” wrote The Economist at the time. “One plausible hypothesis holds that the currency’s rise was the result of a speculative bubble” caused by worldwide media coverage of Bitcoin’s rise.

News of the $30 rate has been a hot topic on r/Bitcoin over the past week, with users debating what the milestone means for the Bitcoin community.

“The USD is crashing but nothing nearly as dramatic as the BTC price rise. This is another bubble, just like the one in July 2011,” insanityfarm commented in a thread on Feb. 13. “I’m only focused on the long-term, say 10 years out or more. I expect BTC will become a lot less volatile over time, and continue to increase in value as more people use it.”

Theymos believes the future of the currency is still uncertain.

“The market still doesn’t have a lot of depth, and the exact price is still determined mostly by speculation,” theymos told the Daily Dot.

“I wouldn’t be very surprised if the price quickly increased or decreased by $10. A higher, increasing price may attract more investment in Bitcoin businesses, which is good for the community. These milestones also generate news articles, which bring in new users. Bitcoin is a lot more than just the price, though; I’m much more interested in the innovative new Bitcoin sites that keep being created.”