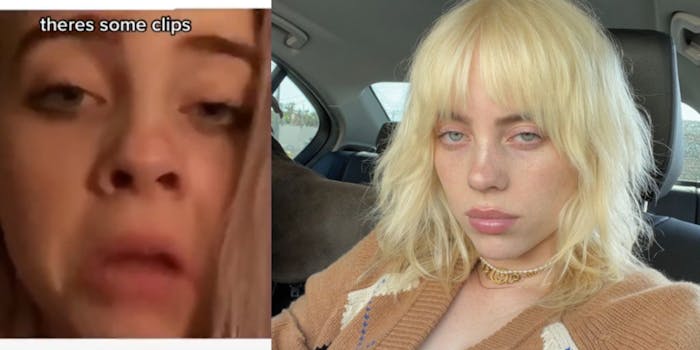 'I am appalled and embarrassed and want to barf that I ever mouthed along to that word.'

In the wake of her boyfriend Matthew Tyler Vorce having to apologize for old Facebook posts including racist and homophobic slurs, Billie Eilish has made a similar apology. This comes after a 5-year-old video resurfaced showing Eilish mouthing an anti-Asian slur while singing along to Tyler the Creator’s song “Fish.” The video also appeared to show Eilish mocking Asian accents by speaking gibberish.

This video was widely shared on TikTok, with opinions divided over whether it was fair to judge Eilish (who is now 19) on her behavior at the age of “13 or 14.”

Eilish apologized for the video on Instagram Stories, saying that she was unaware she was using a racial slur at the time. “I am appalled and embarrassed and want to barf that I ever mouthed along to that word. This song was the only time I’d ever heard that word as it was never used around me by anyone in my family.”

She described her accent as just a “silly gibberish made up voice” that she used as a child, and was just “goofing off” rather than attempting to imitate any specific language or culture.

However she also took full responsibility, saying, “Regardless of my ignorance and age at the time, nothing excuses the fact is that it was hurtful. And for that I am sorry.” Adding that she felt heartbroken at the idea that she’d hurt or offended anyone, she concluded, “I not only believe in, but have always worked hard to use my platform to fight for inclusion, kindness, tolerance, equity and equality.”