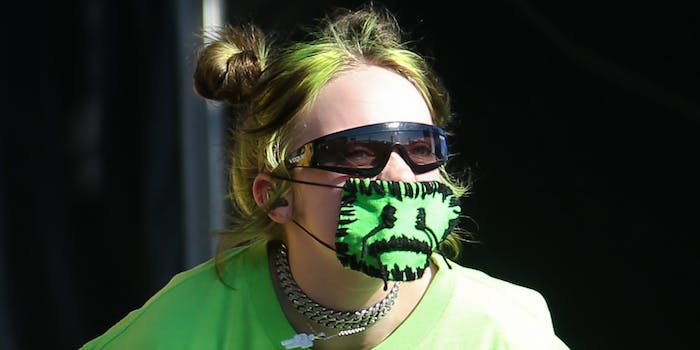 Users in the comments suggest that Eilish was 14 years old in the clips.

A TikTok compilation of multiple clips allegedly shows Billie Eilish saying the c-word and mocking Asian languages. The pop star’s alleged use of African-American Vernacular English, or a “blaccent,” is also under fire in the video. The video was reposted on Twitter, prompting fans to both defend and criticize Eilish.

The beginning of the video features quick cuts of the 19-year-old singing brief parts of different songs, with the caption, “if u can name every song in this i will pay u.” The TikTok creator that posted the video, @lcxvy, claims in a caption of the clip that Eilish sings the c-word—a slur against Asian people—in one of these cuts.

The TikTok then shows Eilish on an Instagram Live, in which she describes her brother, musician Finneas O’Connell, watching David Dobrik’s YouTube videos. The user who posted the TikTok captioned the clip with on-screen text: “Her brother calls her out for talking with a blaccent.” Her brother, however, does not appear to be speaking in the clip.

The final clip in the TikTok shows Eilish shouting in gibberish that appears to mock Asian people and laughing.

Users in the comments suggest that Eilish was 14 years old in the clips, though it is not clear exactly when these original videos were recorded.

“SHE WAS A CHILD, to be clear i dont stan her and i dont listen to her i just see it objectively,” one user commented on TikTok.

The TikTok creator responded, “i am a child too and i know what racism is? racism don’t have an expiration date lmao.”

The allegations of racism come shortly after Eilish was accused of queerbaiting in the music video for “Lost Cause” and after Eilish’s 29-year-old boyfriend, Matthew Tyler Vorce, was accused of exhibiting racism and homophobia on Facebook.

Eilish’s representative did not immediately respond to the Daily Dot’s request for comment.