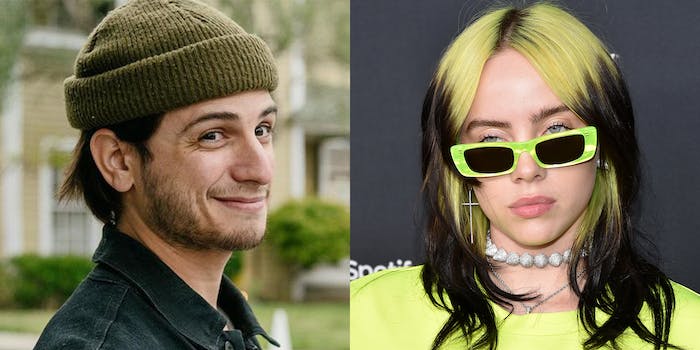 Billie Eilish‘s new boyfriend, 29-year-old writer/actor Matthew Tyler Vorce, is facing backlash from Eilish’s fanbase due to some offensive comments he allegedly posted on Facebook. These comments include racist and homophobic slurs, resurfacing on Twitter and TikTok this weekend. However, the screencaps haven’t been verified as genuine, as Vorce doesn’t have a public Facebook page.

Vorce’s current social media presence is pretty neutral, posting photos of his everyday life on Instagram. While he and Eilish haven’t discussed their relationship with the press, they’ve been spotted together in recent months, and Eilish’s brother and mother follow him on Instagram.

Vorce was already a divisive figure among Eilish’s fans, with some people criticizing the couple’s 10-year age gap. These new screencaps added fuel to the fire, shared by Eilish stan accounts in a classic call-out post format. But once again, the original posts haven’t actually been confirmed to be real.

Neither Eilish nor Vorce have commented publicly on this controversy, although some fans noticed that Eilish liked an Instagram post describing her fanbase as “embarrassing” for reacting to something “literally made up.” The Daily Dot has reached out to Vorce and Eilish for comment.