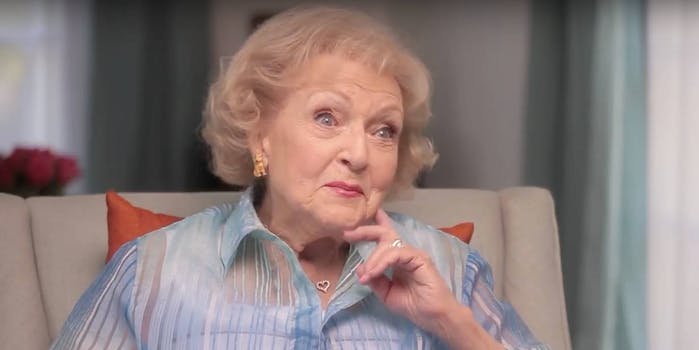 She was weeks away from her 100th.

Iconic Hollywood actor and internet mainstay Betty White has passed away at 99, TMZ reported Friday. The gossip site reports that law enforcement officials said she passed in her home. Additional details about her passing were not available at press time.

Update 2:39pm CT, Dec. 31: The news has been confirmed by several other news outlets. As the New York Times notes: “Her agent, Jeff Witjas, confirmed the death to People magazine.”

Just a few days before her death, the actress and comedian gave an interview to People magazine in which she shared her “secret to happiness”: Remaining positive, and avoiding “anything green,” in anticipation of her 100th birthday on Jan. 17, 2022.

With a career spanning eight decades, White became a household name through appearances on The Mary Tyler Moore Show, Golden Girls, and her eponymous variety program, The Betty White Show.

White became a well-loved online presence through previous death hoaxes, viral moments at award shows, and a resurgence of popularity for her television shows as they have been added to streaming services for a new generation to fall in love with.

“New year’s is canceled,” one user wrote on Twitter. “I don’t want to live in a 2022 without Betty White. RIP to a true legend.”