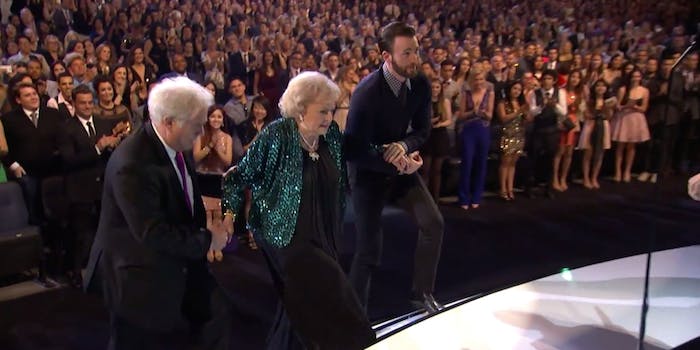 As if we needed yet another reason to be swooning over Chris Evans.

He wasn’t up for the Favorite TV Icon Award during Wednesday’s People’s Choice Awards broadcast, but he was stationed fairly close to Betty White when Ellen DeGeneres announced her as the winner. The act of chivalry that came next appeared to be instinctual for him as he helped the 93-year-old actress walk up the stage to accept her award.

Yet again, Evans has failed to convince us that he’s not actually Captain America.

After receiving a standing ovation, White was both warm and self-deprecating when giving her acceptance speech to the audience.

“When Melissa McCarthy came up on stage and said she’d stay with us as long as you let her—well, you’ve abused the privilege with me,” she said.