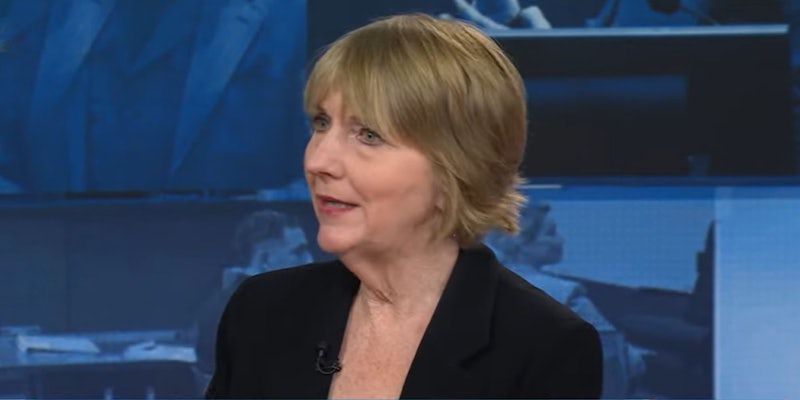 People online are criticizing Amber Heard’s lawyer Elaine Bredehoft after she blamed social media for the outcome of the Heard-Depp trial.

On Wednesday, a jury found that Heard defamed Johnny Depp in an op-ed published in the Washington Post and awarded Depp $10.35 million in damages. The judge awarded Heard $2 million in compensatory damages.

Following the trial outcome, Bredehoft appeared on the Today Show to discuss the trial’s outcome with host Savannah Guthrie. During the interview, Bredehoft said that Depp’s team was focused on “demonizing” Heard and suppressing her legal team’s evidence.

One of the ways Heard was effectively “demonized” was through social media, Bredehoft alleged. Throughout the trial, Heard faced severe backlash online from Depp’s fans. The Daily Dot previously reported on the online harassment and “thousands” of death threats Heard received during the case, as well as the violent revenge fantasy stories people wrote about Heard on a fanfiction site. Also, a right-wing blog reportedly spent thousands on Facebook ads to discredit Heard during the trial.

The jury must have been influenced by such instances, Bredehoft said on the Today Show. Jurors were not supposed to check social media during the trial, but Bredehoft argued that they went home to their families every day, where it must have been hard to not hear about the latest online arguments.

“It’s like the Roman coliseum, how they viewed this whole case,” Bredehoft said on the show. “I was against cameras in the courtroom, and I went on record with that and had argued against it because of the sensitive nature of this. But it made it a zoo.”

People on social media are now slamming Bredehoft for her remarks.

One TikTok user @devotedly.yours, who is a vocal Depp supporter and grew in popularity by sharing videos about the trial, shared a clip from the Today Show interview with the caption, “Part 2 of Elaine Making Excuses.” The video, which had been viewed about 136,000 times, garnered a slew of negative comments against Bredehoft.

Several viewers said they have no more sympathy for the lawyer after her comments on the show.

“Thank goodness we can all stop feeling sorry for Elaine … digging her own grave by doubling down. I would have loved for her to stand up for herself,” one of the top comments on the video reads.

“I have no sympathy for her anymore. Now they’re blaming the courts and the jurors being swayed,” a second viewer commented.

A third said, “And she pretty much sitting on tv saying that the jury was compromised … when are they going to stop.”

On Twitter, people shared similar opinions, arguing Bredehoft was willing to blame anyone or anything for the loss in court.

During the Today Show interview, Bredehoft said Heard plans to appeal the verdict.