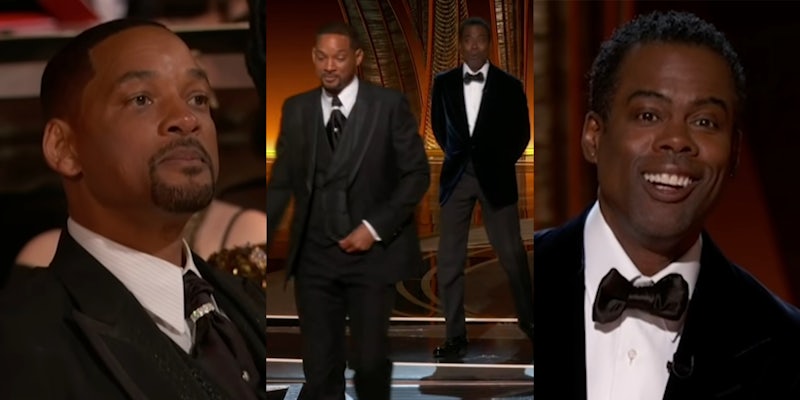 The 2022 Oscars ceremony was dominated by one shocking event: Will Smith walking onstage and slapping comedian Chris Rock in the face.

The slap (and Smith shouting “Keep my wife’s name out of your fucking mouth!”) was in response to Rock making a joke about Jada Pinkett-Smith’s shaven head, quipping, “Jada, I love you. G.I. Jane 2, can’t wait to see you.” This throwaway line had an unspoken backstory. First of all, Jada Pinkett-Smith suffers from hair-loss due to the autoimmune disorder alopecia, making this a meanspirited joke. And secondly, Rock also mocked Pinkett-Smith at the 2016 Oscars, suggesting there was already bad blood between them.

But no one could have predicted Smith’s reaction. The slap cast a pall over the rest of the ceremony – particularly when Smith himself won the Oscar for best actor, delivering a long, emotional, and instantly divisive acceptance speech/apology. Meanwhile online, viewers posted memes and increasingly hot takes about what went down between Smith and Rock. One of the most controversial comments came from filmmaker Judd Apatow, who tweeted that Smith “could have killed him.”

This now-deleted tweet was immediately skewered for its extreme stance. It seemed like a wild exaggeration to say that Smith “could have killed” Rock. He slapped him once and then returned to his seat—the kind of altercation you can imagine happening at any bar on a Friday night, from a guy defending his wife from what he saw as an unacceptable public insult.

Many Twitter users accused Apatow of racism for describing Smith in these terms, a recurring theme in commentary about the slap. Some also said that Apatow’s reaction was hypocritical due to his long relationship with James Franco, who (among other things) allegedly assaulted Busy Philipps while filming Apatow’s show Freaks and Geeks.

This backlash led Apatow to delete all of his tweets and RTs about the slap. But his remarks had already become emblematic of a certain kind of response from white commenters.

Literally no one expected onstage violence at the Oscars, nevermind from Will Smith, an actor with a generally chill, professional public persona. Watching the aftermath unfold in real time was a surreal experience, and many viewers scrambled to find their own interpretations of what happened. These ranged from people defending Smith’s behavior as a valid response in context, to Apatow-style denunciations of violence. And a lot of those denunciations came from white people, playing into inflammatory stereotypes about Black men—and often appearing hypocritical in a broader social context.

The slap was shocking because it was Will Smith, and because everyone watched it happen live at the Oscars. It completely makes sense for it to dominate the post-Oscars conversation. But in the grand scheme of Hollywood violence and abuse, Smith slapping Rock for insulting his wife is a tiny drop in the ocean. As speculation grew that Smith might be asked to return his Oscar, people began to point out more scandalous Oscar honorees like Woody Allen, Mel Gibson, Roman Polanski, and Harvey Weinstein.

The Academy of Motion Picture Arts and Sciences released a brief statement after the ceremony to say they “[do] not condone violence in any form,” but it’s safe to say that if Will Smith is penalized by the Oscars organizers, there will be a public uproar.