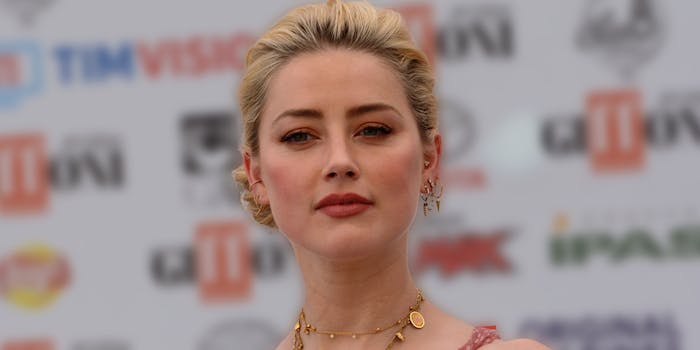 'I would say seek help but clearly y’all are beyond that.'

The Amber Heard and Johnny Depp defamation trial has drawn spectacle from many angles, with social platforms flooded by #JusticeForJohnnyDepp and adoring fans defending the actor who stands accused of allegedly abusing his ex-wife, who he is suing.

Between fan speculation and attention paid to the case online, Heard has said she has suffered death threats, and experts who have been called to testify in the ongoing trial have been Google review bombed by fans. Now, it appears the Amber Heard hate has bled into the fictional realm.

According to a user on Twitter, there are stories on fanfiction site Archive of Our Own, www.ao3.org, that detail violent treatment of Heard by Depp, as well as a movie producer.

“There are two ‘revenge’ fics about Amber Heard on @ao3org,” Twitter user @chrispinerd wrote. “One of them has Amber being explicitly tortured and mauled to death by Johnny, and the other is about her getting ‘punished’ by a movie producer slapping her and calling her names during rough sex. I’m actually sick.”

One of the stories, titled “Amber Heard Gets Punished” written by a user named Axelex12, which has a handful of comments. Some readers wrote that they enjoyed the story, while others condemned the author.

“This is fucking sick,” one reader wrote. “What a horrible human being you are for writing something like this and then publishing it on a fanfiction website. Fucking hell.”

“It’s (something) clinically wrong with y’all,” another reader wrote. “I would say seek help but clearly y’all are beyond that. Find a god and pray hard.”

“I sincerely hope you get some kind of psychiatric help,” a user wrote. “And also that you never write again.”

The Daily Dot was unable to reach out to the authors of these stories on Archive of Our Own for comment regarding their content.