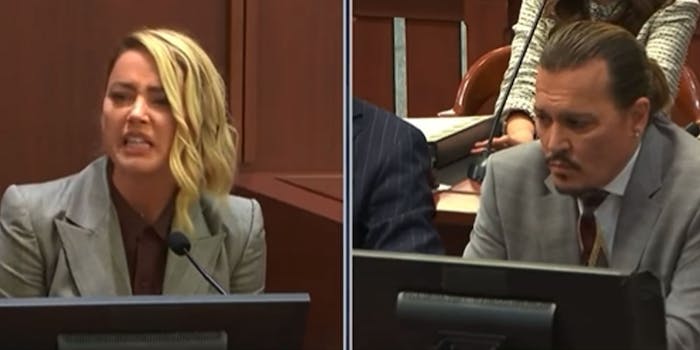 ‘I don’t deserve this’: Amber Heard talks about harassment and ‘thousands’ death threats she receives

As the defamation trial between Johnny Depp and Amber Heard nears the end, Heard took the stand. In her testimony on Thursday, she shared about the daily death threats and harassment she’s received on behalf of Depp since the highly publicized trial began.

“…The harassment and the humiliation, the campaign against me that’s echoed every single day on social media and now in front of cameras in this room,” she says, according to a clip posted on Twitter. “Every single day I have to relive the trauma. My hands shake. I wake up screaming. I have to live with the trauma and the damage done to me.”

She shared how her friends, intimate partners, medical professionals, and movie crews have to “live with a set of unspoken rules about how not to scare me” due to the “damage I walk around with every single day with what I’ve lived through, with what I’ve survived. Heard has previously testified that Depp has physically and sexually assaulted her during their six-year relationship. In 2016, she filed for divorce from Depp and a domestic violence restraining order.

She added that “even though Johnny promised that I deserved this and promised to do this, I don’t deserve this. I want to move on.”

Heard also implied that Depp “threatened” her. “Johnny threatened—promised me—that if I ever left him, he’d make me think of him every single day that I lived.”

Some of the alleged daily harassment she faces includes people wanting “to kill me” and “put my baby in the microwave.”

Since Depp first called her allegations a hoax in 2018, Heard said she gets “hundreds of death threats regularly, if not daily. Thousands since this trial has started.”