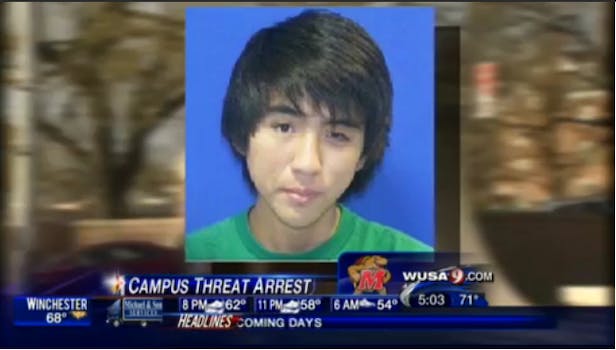 The post by Alexander Song marked the first time a Reddit user was arrested after threatening violence on the site.

It was a threat you just couldn’t forget.

“I’m thinking about going on a shooting rampage all around campus until the police come and kill me.”

That was the message greeting Reddit’s University of Maryland forum late Saturday night. Many dismissed it as a joke. Some did not. University police received three phone calls over the weekend. By Sunday morning, they had arrested the poster, Alexander Song—a sophomore honor student and by all accounts a pretty normal kid.

UMD police were in contact with Reddit staff over the weekend, according to the site’s general manager, Erik Martin. To Martin’s knowledge, this is the first time a Reddit user has been arrested after threatening violence on the site.

While not necessarily common, threats like this tend to happen most frequently on social networks like Facebook. Police have made three similar arrests based on threatening Facebook posts within the past two weeks, including two high-school students in Massachusetts who threatened to “shoot up” their high school and a Brooklyn teen who threatened to blow up his.

But on Reddit, where posters are shrouded in a veil of pseudonymity, posts like Song’s are relatively rare—and when they do occur, they’re often chalked up to trolling. Indeed, redditors greeted Song’s post with similar skepticism.

And shortly after his arrest, some lashed out at the those who called the police.

“You guys are fucking idiots,” ordinary-people wrote on Reddit. “Of course it was a fucking troll. He posted it on reddit, I seriously hope the people who reported this feel guilty about his arrest for the rest of their pitiful and meaningless waste of lives.”

Police found no weapons in Song’s dorm room or his parent’s home in Maryland.

Song was, by all accounts, an intelligent and easy-going student. He was a member of a special research program for select honors students at UMD, called the Gemstone Project. Song was one of the leaders of a sophomore team researching methods for purifying methane gas, a professor who organizes the program told ABC News.

People who knew him said Song wasn’t the type to go on a shooting spree. Yoon Shin, one of his teammates for the Gemstrone Project, told the Associated Press that he was “one of the most harmless people I know, and he would not hurt anyone.”  Added another student who knew Song: “[H]e is a very intelligent, good-natured individual. He would never hurt anyone.”

Redditors who claimed to know Song described him similarly. Insterstate8, apparently one of Song’s high-school friends, wrote “he is definitely not the kind of person that would go on a shooting rampage. Really bad joke that probably got blown out of proportion.”

He or she added: “ I haven’t spoken to him much since we’ve come to college, so who knows. Joke or not, action is necessary. I hope he’s alright.”

MontereyJack144, one of the three people who called the police, suspected a troll as well. But he didn’t care.

“I’d much rather be safe than sorry,” the redditor wrote. “When I was deciding whether or not to report it, I realized I’d rather be a little uncomfortable talking to a police officer than have to live with myself if it turned out to be real and I did nothing.”